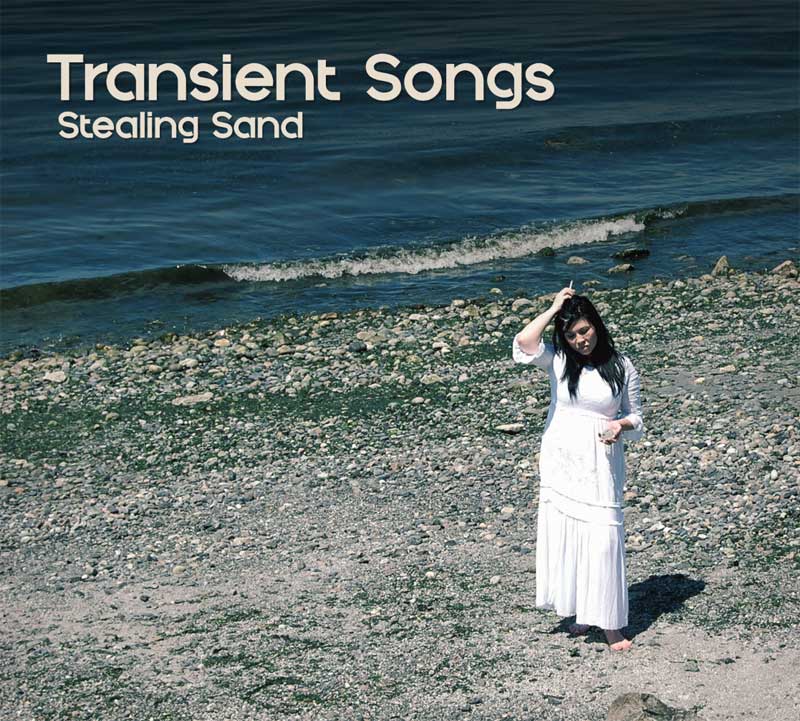 Transience. Traveling to escape customary life. Wandering. Vagabond impulses. Songs that were born and created throughout a determination to experience scenes and emotions outside of the routine experience. Sometimes, one must venture outside of familiar cities, states, countries, and climates in order to reflect upon the beauty of an otherwise uneventful daily existence. This is what comes to mind when hearing Stealing Sand, the new album by Seattle quartet, Transient Songs. That said, these kinds of things will likely grasp the listener when hearing their previous releases as well. Stealing Sand is the third full-length release from the band and it might just be their best release yet.

Transient Songs, in this incarnation, includes Jon Frum, the principal songwriter, on vocals and guitar, Michael Shunk on guitar and keyboards, Dayna Loeffler on bass and Craig Keller on drums. This band gels and clearly has chemistry in both sound and performance. Stealing Sand encapsulates the sound of a band that sounds like they could have been recording their last album together. It is a vital statement that seems like it was hell-bent on being recorded. The songs, and especially Frum’s lyrics, seem to have been cultivated from an estranged perspective outside of himself that yet still comes passionately from within. The vantage point of the listener is thus removed and also extremely intimate. It is beautiful and painful and full of questions that cannot be answered, even after repeated listens.

“Branches through the Trees” contains vibrato guitars and a stoned, driving melody that is almost hypnotizing, especially considering that it is only four and a half minutes long. “Lost in the Middle” is a kaleidoscopic, beautiful song that sounds like it could have been a classic album track by The Church. “Shoppin’ for Coffins” is perhaps the album’s centerpiece. It is a chilling and surreal song born out of a dream that is full of ghosts, questions, regret, and a general bewilderment of where the line between where reverie and reality intersect. Musically, it is a psychedelic, tight and succinct. There is too much uncertainty to fully connect the pieces. In Frum’s words, “The muse is always elusive.”

“If the Summer Resigns” is reminiscent of Chicago’s criminally unknown melancholy pop outfit, The Chamber Strings. The title track, “Stealing Sand” recalls the breezy, melancholy sound of Transient Songs’ excellent debut, Cave Syndrome. “All Said and Done” includes some truly gorgeous cello and acoustic guitar interplay. It recalls a warm 1960’s sound of The Beatles or The Kinks. Just listen to the moving opening lines, “When it’s all said and done and you’re out of places to run/Chasing other people’s dreams away/You’re out on a limb, spinning your webs again/Did you ever think that luck has led you astray?”

“Drug Dreams” is the biggest rock number on Stealing Sand and it fucking rocks. This is a classic garage rock song. This one comes from the day that your hangover wears off and all you want to do is start drinking because being sober again is far more painful than the hangover is. The record closes with “Those Hidden Lakes,” which might be the best song on the album. It is a subtle and sad resignation where the mundane reflection on a day job and drab existence seems to become overwhelming. However, the song ends up being full of hope and an appreciation for all of the unsaid things that one takes for granted. It’s the perfect ending to a record that is heavily involved in a wide spectrum of complex human emotions.

In short, Stealing Sand is a modern day classic. Transient Songs will be playing The Sunset in Ballard on the 28th of July. Mark your calendar if you want to see some inspired psychedelic rock and roll.