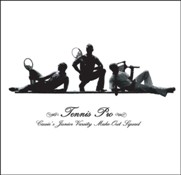 "But aren't jokes, in a sense, the primal form of Wisdom?" –Thomas Disch

The first time I ever saw David Drury perform was when he did spoken word from a story he’d contributed to the reading tour for "Little Engines," the small press magazine that launched the mighty indie-publishing TNI Books. It was at the Paradox when it was located in the old theatre on the Ave and not the ghastly outer-Ballard super-Starbucks it is now. Drury was hot that night, but not just sweaty in that moist little club — he was a master of timing and wit, contributing one of the best tales of the night, and so it was no surprise when later he got published in Dave Egger’s "2003 Best American Non-Fiction Required Reading."

Speaking of wit and timing, Drury’s band, which he shares with bass player Phil Peterson (who wrote and sings lead on five of the songs) and drummer Sean Lowry, has created a second album full of spot-on humor and extremely catchy music. Drury’s a guitarist on the order of Dave Davies of the Kinks, punching out power chords and peeling out squealing noises like prime 60s garage rock icons, and both he and Peterson are wonderfully deluding singers, with an amazing range (between Peterson’s Beach Boys choral-style "Intro" to Drury’s garage-grimy snidely boastful "Fastest Man"), able to effortlessly sound friendly and sarcastic at the same time.

An ability to write fetching tunes doesn’t stop Drury and Peterson from observing and poking fun at weird dating, endless summer surfing, meeting women by scaring animals with fireworks, seducing your mom ("don’t even think you‘ll inherit the house"), fantasy girlfriends, etc. Sean Lowry’s drumming connects perfectly with Drury’s riffing, often dropping out to just a bass drum thump so everyone can handclap, the sign of someone keeping perfect rhythm. The album can boast music as diverse as the wonderful string arrangement on "Kidnapped!" to the Vibrators-style punk of "Imaginary Girl."

With two excellent songwriters, Tennis Pro has it made, and Drury is in legion with other authors who play their own songs, like Patti Smith, Richard Hell, and Graham Parker. His work may not be as serious or as long-time successful as his brothers and sisters in lit-and-music, but it rocks none the lesser and is often a hell of a lot funnier.