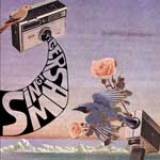 Nothing like being home for the holidays, even if it means five hour red-eye flights from Seattle back to Boston. You feel like you can gather your wits about you, reconnect with friends, and in general, get a clue again. Or at least you can hope that's the way it works. You can also luck out and see some great shows by bands that don't make it out to the northwestern outposts. For me, New Year's Eve in Somerville offered up two great acts, Casey Dienel and Tiger Saw. After being beaten over the head by a friend in Massachusetts about the merits of Tiger Saw, I have to admit, she was right and their new album Sing! deserves as wide an audience as it can get.

Tiger Saw seems to concentrate quite a lot of musical talent into a small space. Heck, during the show they fit a guitarist/singer (Dylan Metrano), a bassist (Sam Rosen), a drummer (Gregg Porter), a keyboardist (Casey Dienel), a cello player (Juliet Nelson) and an upright bass (Nat Baldwin), all onto a stage that was roughly the size of a large table. What this creates is a rather intense performance experience that is also captured on their album. Tiger Saw combine the post-70's rock sound of Built to Spill with the reverberating Americana of Palace with a good helping of Modest Mouse and Songs:Ohia. Sing! marks Tiger Saw as one of the best under-the-radar indie rock bands in the U.S. right now.

The title song to Sing! is a tribute to, well, everything. It can best be described as the perfect indie rock ensemble piece, where it seems like everyone gets a line and everyone joins in on the oft-repeated chorus of "sing, I'll sing." It contains a genuine unfettered celebration of what is, in fact, being sung about, a mood that is lacking in much indie these days. "The Sun" feels like it takes a page out of the There's Nothing Wrong with Love-era Built to Spill, with plaintive, aching guitar backing excellent vocals by Dylan Metrano, cellist Juliet Nelson and, well, pretty everyone else: "I love you so and I want to tell you/over and over and over" pleads the lovers. If you ever wanted the perfect song about longing for someone you miss, "Postcards & Letters" is it: "Home is never really that far/Keep this song with you wherever you are." The dusty drums and gently plucked banjo gives the song a familiar sound even if you've never heard it before and captures the same longing tone of Palace's "(End of) Travelling" or "I Send My Love To You".

"Lord Knows, I Need My Own Place" is another song that sounds like it could have been written in a dusty Depression Era western town, with Metrano singing "until then, I will roam/I'm tired of being alone," telling his story of drifting from town to town in search of love and a home. At times, Tiger Saw songs like "For Adrian" and "The Tiger & the Tailor" almost seems like the logical extension of Bright Eyes' "I'm Wide Awake, It's Morning" neo-indie-country sound. The closing number, "The Sea" might be the best Neil Young never written by Neil. Dueling guitars full of feedback are combined with a steady dose of earnest lyrics on the growled (well, for Tiger Saw) vocals. The guitars capture what can only be assumed the crashing ocean waves that surround the singers as they intone Forever I watch the sea/and the sea, it watches me. It is a near-perfect combination of lyrical content and music.

Tiger Saw take their cues from many branches of the indie rock family tree but in doing so, they combine it into a fresh sound that draws you in. If they ever worry about too many chefs spoiling the stew (only 15 musicians on Sing!), it doesn't show and they needn't worry. The lush musical experience that is created makes you wish more musicians were as ambitious as Metrano and his co-horts. Sing! is a remarkable disc that not only captures the live Tiger Saw sound, but expands it further, showing that they should have a promising future.