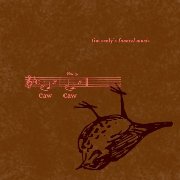 This album came to me with no information about Tim Seely and his apparent death (just kidding, check the title), but it did come packaged fetchingly — really, when friends drop by and check out the records I'm listening to, I've been showing them this lustrous little brown case with the twine binding and all, and as many of my pals are either designers or in bands, they all go, "Ooh." Then they recognize the name of the artist by him playing out around town the past couple months — for example, most recently Tuesday, August 16th at Chop Suey — and the random shuffle of tracks from it played on KEXP.

So I hit the Internet and find out that Funeral Music was produced by Dennis Herring, who has worked with everyone from Costello to Sparklehorse to Modest Mouse, and that Seely is a Seattleite who had some misadventures with an earlier band (the Actual Tigers) on Capital/Nettwerk and so went down to the burg of Oxford, Mississippi for a few years to lab-concoct this late night excursion into what un-bums his flow.

What's more important now is that I tell those same friends I can't get this sublimely melodic, perversely intelligent, musically just as fetching compact disc out of my player. The title is completely a misnomer: This doesn't sound like Funeral Music at all; it actually sounds like those a-little-too warm summer nights you spend hanging out with your friends at that park across from the KFC and the Richard Hugo House up on 11th, goofing and shit-talking and flirting and breaking each other's balls, and eventually getting a little too drunk and revealing a little too much and then throwing those Three Buck Chuck bottles (damn, I love Trader Joe's) at the Hugo House, laughing because literature has a "home," and then nearly passing out in the passenger side of your pal's car, but you drive up to Magnolia instead of back to your messy-ass apartment, and flip off all the people in the windows of those big fancy houses — who the fuck lives there?), and eventually you might throw up in your neighbor's yard, but it won't ruin the night at all, as you stagger inside.

The pleasuring melodies on this consistently delightful 11 song full-length disguise the great poetry and the really funny one-liners that jump out at you by the third or fourth play — it opens in the almost-stark "6 Foot Crest" with the image of "We built a house of shattered glass / The grommets growled as she rose." The intricate but accessible acoustic guitar picking and weird but subtle keyboard noise leads to non-ostentatious strings, a perfect surrealist back porch hymn, before falling into the great drum-driven minimalist dazzle rock of "On Film I Play Myself," which ends with the quirky image of "And in the wet cement I'm bathing/I feel Roman." These are lyrics that you expect from bands like (say, fro the hell of it) Slomo Rabbit Kick, and probably shouldn't work in such musically accessible material — yet here they are, joyfully bobbing like chewy tapioca balls at the bottom of sweet milk-rich bubble tea. (I like Avocado.)

The album seems to be at least half perfect cinematic-inspired folk-rock singles, and in a perfect world we'd for example be sick to death of hearing the emotionally rich "The Bees At Night" or the hilarious and devastating title track played incessantly on commercial radio. It's as if an on-fire Paul Simon were reincarnated with spare indie rock delicacy and no urge to exploit the Third World for his muse. Wait, Simon isn't dead yet.

The 28 year old Seely describes his sound as "space-folk songs for hard luck lovers," and whilst that is an amusing way of putting it, it's as deluding as the title of the album too — implying an experimentalism or darkness that is a very minor part of the structure here. This album sounds like it was a delight to make — that Seely got a kick out of writing the lines "A roach in the wine: time spent / If only sighs could pay the rent," or "If left to my own device / I find fault in all things nice" or especially "It's that look in your eyes / Picturing me dead when I am sleeping." But it also sounds like it was a lot of fun to create on all levels — cricket-percussion on the surly "Telephone," tight-little-keys-bass riffs on the closer "Fake What You Feel" — and you know, these lyrics would just be good writing if Seely's voice wasn't amazingly confident. And thge playing wasn't so completely spot-on.

His go around with a major label apparently gave him the hard knocks a smart guy sometimes need to figure out exactly what he wants to do with his art and his life — and with this humble but elegantly designed sound, he has succeeded at more than that.