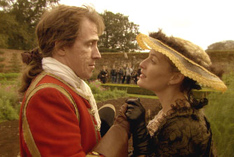 The Life and Opinions of cosmoNY, film reviewer.

{Editor's note: Laurence Sterne's mid-1700s novel The Life and Opinions of Tristram Shandy, Gentleman was anarchically self-referential — postmodern a full two centuries before it had any business being so. Imaginary boy cosmoNY's unconventional review of the new film version quite nicely pays homage to the text's ultra-digressive nature. –ib embracey}

Welcome to the review of Tristram Shandy: A Cock and Bull Story and staring Steve Coogan, Rob BrydonGillian Anderson, and directed by Michael Winterbottom.

But before this review can be written, a lot had to happen. For one thing, I moved to New York. Now, I didn't really move to New York to write this review. That would be silly. But it seems necessary to say that I used to write for Three Imaginary Girls when I lived in Seattle, and that when I moved to New York, I needed to get settled in before writing again, so it's been a while. But now I'm back, ready to write a review of Tristram Shandy.

Anyway, what was I saying? Yes, before writing this review I had to be born. Well, that's going back a bit far. Jumping ahead, after moving to New York, and before I write the review, I have to see the movie, which I did, last Sunday at the Angelika. The Angelika is this sort of arthouse multiplex on Houston Street. They have a nice cafe, but an espresso is like $4. And movies here are $10.75. Wow. And Houston is pronounced "How-ston". Don't think of Texas.

So, they say that the 18th-century novel Tristram Shandy is unfilmable. But Winterbottom always seems up to a challenge. Every review of the movie has to say 'unfilmable' and talk about Coogan and Brydon chatting about the color of teeth. "Tuscan Sunset" and "Pub ceiling." I will try to avoid saying the obvious in the review, but it will be hard. Another thing to say is that Tristram Shandy is one of the greatest books no one has read. Well, I certainly haven't read it. It might have been a good idea before writing this review. But the book is like 400 pages. And one of the jokes in the movie is that hardly anyone on the set has read it either, so it's probably ok that I didn't read it. But I did see the movie.

Actually, I was on a date with a girl named Caroline when I saw the movie. I suggested Tristram Shandy after I found out she already had seen A History of Violence. I emailed her that we should see Big Momma's House 2 on a dare from a coworker. Funny. I wrote back and said I wasn't serious.

In another email, she suggested we go out to eat in Chinatown afterwards, to celebrate the Year of the Dog. I didn't even know it was the Chinese New Year! What a great idea! But it was hard to find a restaurant that wasn't full. We missed the parade, but the streets were still a sea of confetti.

We were walking along, talking about the movie, and I mentioned how I could listen to Kelly MacDonald's voice all day. She plays Coogan's girlfriend in the movie. And then my date surprised me by doing a dead-on Kelly MacDonald Scottish accent and said a line from the movie: "I spent six hours on the train just to have sex with you." Wow. I did a little nervous laughter in appreciation. And all the street lights and signs made me feel like I was in a movie set. Which is totally perfect after seeing Tristram Shandy, which is more about the behind the scenes of the making of the movie than an actual presentation of the book. Just like much of the book itself isn't really the story of Tristram's life, but all the things that get in the way of telling the story.

Where was I? Yes, before I write the review, before I even went to Chinatown, I had to actually watch the movie. The theater was pretty full, and we sat in the middle of a row. I joked to my date that I should probably use the bathroom before the movie starts, because I have such a small bladder, but then these two really old women sat next to us, blocking the way. Sure enough, after the previews ended I had to go. But I just sat and suffered. Was I going to make the old ladies move? Course I couldn't. After the movie, it turns out one of the old ladies was bow-legged! So glad I didn't make her move. But all the references to the groins in the movie didn't help me forget that I had to pee.

Moving on, the highlight of watching the movie was the scene in which a miniature, naked Steve Coogan is upside down in a model of a womb. (It's hard to describe.) Now this scene is absurd enough as it is. But it was this scene that seemed to inspire the couple in front of us to start making out! I'm sure Steve Coogan would be encouraged to know this. I think.

Anyway, it's a good thing that the movie doesn't open in Seattle {at the Guild 45th} until February 17th, because I'm sure there will be a lot of things that will get in the way of me writing a review this week. Plus I have to figure out how to write a review about this 'meta' movie that's all self-referential, or postmodern before there was a "modern" to be "post" about, as Coogan says. Eventually I will have to write the review though. It was an enjoyable, smart movie so I'm sure it will be fun to write.