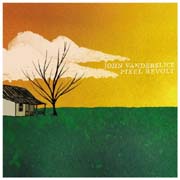 John Vanderslice's new record, Pixel Revolt, out now on Barsuk, offers exactly what one has to come to expect from JV: Excellent song writing, excellent production, and just a bit of the sinister.

His last record, Cellar Door, was a beautiful, dark homage to bluebirds exploding and dying family members, set to the sound of crashes between pianos and electronics and random percussives. It was a haunting, musical expression that conjured images from Donnie Darko to Rhyme of the Ancient Mariner. Bad luck and hardening to pain were the moral of his stories.

Now, a couple years later, a couple years more fermented in his San Franciscan Tiny Telephone studios, JV gives us a collection of fourteen songs, drawn from a dead relationship and 9/11 and a mixture of the two, set to a musical canvas heavy with vibraphone, guitar, and various keyboarded instruments. The result is calmer, but nevertheless mildly sinister, and somehow more passive aggressive.

"Exodus Damage" is one of JV's finest songs to date, in which, according to "A User's Guide by John Vanderslice," (the title of the press release) JV presents, "an erstwhile anti-government militant regrets his shaky commitment to the cause. But an emotional connection to a mentor is always about more than politics."

"No one ever says a word about / so much that happens in the world," JV sings, in his spoken-esque tenor. And he tells of the planes hitting on 9/11, and of the anticipated sound and feeling being all wrong. "Dance dance revolution," he sings, "all we're gonna get / unless it falls apart."

"Dear Sara Shu" is a message to a new employee — "In the end it is love," he sings, and the job seems to be less an actual job than life in general. And indeed, according to the "User's Guide," is is about more. "Yes war is dangerous," it reads, "but our emotional life, especially love, is more so an epistolary apology/warning to my successor." Repeatedly during the song he sings, "You have to learn to survive."

In the end, for Pixel Revolt, it is simply more excellent songs, more excellent multi-instrumental production. More of the same from someone like John Vanderslice. His library is a lesson in how to write and record good music.