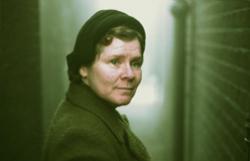 "Either I'm talkin' another language or he's a bit Mutt & Jeff."

Prolific British stage/film/TV actress Imelda Staunton is a dramatic powerhouse — radiant, bittersweet, and all-round wondrous — in Vera Drake, the latest from brilliant filmmaker Mike Leigh. This ultra-compelling movie is definitely a keeper, but what makes it a must-see is Staunton's pitch-perfect performance; she'll be the one to beat come Oscar® time.

We begin in 1950 London, and our titular heroine is buoyantly going about her dowdy day-to-day. She lives in a small flat with her husband Stan (fantastic Phil Davis) and their adult son and daughter, Sid and Ethel (Daniel Mays and Alex Kelly). Vera cleans houses for several well-to-do families, Stan is a mechanic in his brother Frank's (Adrian Scarborough) garage, Ethel works in a light-bulb factory, and Sid is an apprentice tailor. The Drakes definitely aren't rich, but they share genuine happiness.

Vera, ever a cheerful soul in a rather drab life, is always helping people: we witness her visiting the homebound and inviting a less-fortunate neighbor named Reg (Eddie Marsan) to tea, all after a hard day of toiling away at her thankless job (and singing sweetly to herself the entire time). She's regarded as having a heart of gold, but she regularly performs one clandestine act of charity that probably wouldn't earn her that distinction if the family and neighbors knew: she performs abortions on working- and lower-class women.

Vera's appointments are made through a blunt woman named Lily (Leigh regular Ruth Sheen), whom Vera has known since childhood and who now operates a black-market service for items such as tea and sugar (still in short supply in post-war England). We only see Lily a few times — and the more we learn about her, the less there is to like. But to Vera (who wants nothing but to support the frightened, underprivileged souls who seek her help), she's assisting in a service of benevolence.

Abortion in England still existed in a legal gray zone at this time, and the film has much to say about the societal hypocrisy that damns people like Vera but puts impoverished women in danger. The situation was far different for those privy to "proper" procedures; we see the humiliating, invasive, costly process involved through the sidestory of an unfortunate daughter of one of Vera's wealthy employers. Following cringe-inducing visits to a private doctor and a psychiatrist (to whom she has to demonstrate instability), she reports to a discreet private clinic for the procedure, then forces a happy face — as if nothing happened — back in her respectable life.

There's a lot here for us Americans to ponder too. In our own country, should worse come to worse and Roe v. Wade get overturned, people will continue to have abortions … not only depriving women of their constitutional rights, but putting them at the hands of amateur abortionists. This could well be another of Dubya's legacies, folks, if he makes it back in. It's sad and scary to think that our moral landscape could be so close to resembling that of Vera Drake.

So Staunton is a revelation, but the rest of the cast is excellent too, by turns hilarious and heartbreaking (with a few cockney accents that may be a bit tricky to decipher at times — thank goodness this isn't playing at the sound-system-challenged Egyptian). Heather Craney (as Frank's snooty, upwardly-mobile-aspiring wife) and fabulous Fenella Woolgar (last seen in the lovely Bright Young Things) are supporting standouts.

Vera Drake was awarded the 2004 Venice Film Festival's Golden Lion for Best Film — a good indicator of quality, as it joins the ranks of 2003's The Return (which opened here early this year and will likely make my best-of list) and The Magdalene Sisters from 2002. Like those films, it's a compassionate and resonant piece of cinema refreshingly free of arbitrarily shiny happy people. This being the beginning of the holiday movie season, you'll have plenty of those to look forward to, but none will touch you as deeply as a certain guest of Vera's telling her at a particularly austere moment that he's never had a better Christmas Eve.