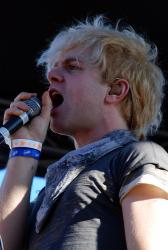 Although I was not assigned to review the Blood Brothers, I feel I should say something since I was right smack in the middle of the front crowd:

There is currently someone's sole imprint in my ankle, and there is an accompanying cut on the top of my foot. I must say, out of the four shows I've seen of the Blood Brothers in the past two years, this is one of the most energetic…for the crowd. I don't have a very good track record at mosh pits, so I was perilously dancing on a fine line at this show, right on the edge of the thrashing. I feared for the crowd surfers, as it was just the concrete street below the strangers they trusted to hold them up. When the kids started to run around and swing their arms I knew it was time to hide behind my 6'3'' boyfriend. For him, he felt awkward as the seemingly oldest in the dancing crowd [he is 23.] People were going crazy; shoes were being thrown, water was being splashed in the air, girls in bikinis were risking the mosh pit. A kid stood next to me with sweat with pouring off of him, so mercifully I gave him the rest of my water. I immediately sort of regretted that, since dancing like a fool in the hot sun made me sweaty too.

But… while the crowd was going crazy, the band was not. Johnny was still flittering around in his signature way, but Jordan was markedly reserved. Staying near the back of the stage during most of the set, he rarely went near the edge to pump up the crowd as usual. Musically, my friend put it perfectly: "They are playing the music…but they're not really into it." It was sort of apparent they're bored and burnt out. There was absolutely no banter between the band and crowd. The songs were played at noticeably slower tempos. And on a few songs, like "Love Rhymes…" the singing just sort of…died off before it was supposed to.

Perhaps it was just the hot weather, but it seemed the Blood Brothers were very tired and worn out with their music.