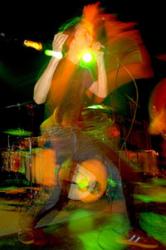 The Thermals, The Icarus Line, and Yeah Yeah Yeahs