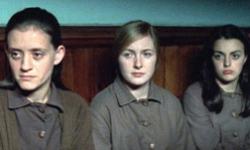 When we first meet Bernadette (fantastic Nora-Jane Noone), two young girls are competing over which will have the privilege of brushing her lovely dark hair — a touching, delicately-presented demonstration of admiration. But soon Bernadette has been committed to one of the Magdalene Laundries (correctional convents for "wayward" girls, thus the namesake), and we witness quite a contrasting scene indeed. After she's been caught flashing a "vertical smile" (if you know what I mean) at a local delivery boy, two deranged nuns hold her down and violently chop those lovely locks. The most wretched of the bunch (Sister Bridget, played to horrid perfection by seasoned veteran Geraldine McEwan) finishes this dastardly deed by holding Bernadette's bloody face to a mirror so as to "see yourself as God sees you."

Harsh, you say? Well, such things really happened, and that's only a glimpse of a truly barbaric episode in Irish Catholic history. Operated by the Sisters of the Magdalene Order, forced labor camps were condoned by the church for over 150 years, and the last one didn't shut down until 1996. The 30,000+ women placed in the laundries were cut off from their families, compelled to work almost incessantly, and made to endure unspeakable maltreatment by the nuns in charge.

Abuse was standard protocol for The Magdalene Sisters, and this extraordinary film (Golden Lion winner at Venice last year) astonishingly relays the experiences of three survivors of the convents in the 1960s: newly-scalped Bernadette, condemned for her ability to incite evil thoughts in men; unwed mom Rose (Dorothy Duffy); and Margaret (Anne-Marie Duff), whose rape by a cousin was obviously her fault. Their stories make for a masterful piece of cinema — brutal, enlightening, and at times overwhelmingly intense.

Acting and cinematography come immediately to mind on the long list of praiseworthy elements. Yet I'm most impressed with Peter Mullan's brilliant direction, at his astonishing ability to alter tone for dramatic effect. One of the film's few upbeat scenes has a particularly evil priest getting his comeuppance in a highly comic, highly public way… then suddenly a harrowing detail comes to light, shifting the mood of the piece so jarringly that my jaw is still on the floor of Pacific Place.

I love that Mullan gives us so much credit. There are two gorgeous scenes in which characters relay critical information that we as audience members already know — the shots are framed so that we're distanced from the action and allowed to hear only ambient sound, allowing us to focus on the way dialogue looks. Bloody brilliant. And he's never exploitive with these stories, as tough and repulsive as they are; a constant, almost reverent dignity is maintained throughout.

The grim, cruel world of The Magdalene Sisters isn't for everyone, and the bitter truth it conveys is far from joyful. But when we're finally allowed to see the newly-liberated Bernadette defiantly letting her hair down in front of the nuns who mistreated her, the freedom is ours as well.