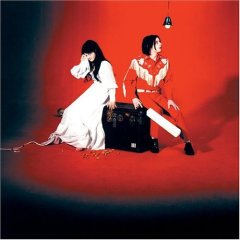 The First Official Review of Elephant

Considering the White Stripes' mad dash from indie obscurity to superstars du jour, it's no wonder it feels like they're stomping across America. And with the trumpeting of their forthcoming album, Elephant, due out April 15th on V2 records, they show no signs of slowing down. I personally am so eager to be trampled by the 14-song behemoth that I am compelled to review it this very minute.

First, let me say that the cover art is brilliant. This go-round, they will focus on a red and white motif, using the minimalist ideals of De Stijl (the movement, not the album – well, I guess the album based on its derivation from the movement… never mind) to strip down the themes to their bare necessities. Instantly recognizable as a White Stripes album, you pick it up just knowing it will be great. (p.s. Meg looks hot in that outfit!)

And it is great. On this album, Jack and Meg forego any rock star posturing and instead focus on the fundamentals of their art. It is a stripped-down, balls to the wall onslaught of 4/4 time and heavily distorted guitar. Looking at the titles, I imagine tracks like "Black Math" or "Ball and Biscuit" will deliver that crunchier-than-thou punch that makes all the boys shout "YEAH!!!," while "I Want to Be the Boy" and "The Hardest Button to Button" might carry those gentle melodies that hold the Stripes above the rest of the garage-revivalist rip-off artists. There won't be any fancy drum solos on Elephant, no 48-track guitar overdubs, no camera tricks or sleight of hand – just rock & roll, plain and simple. I think the songwriting will show a Jack White getting in touch with his roots, with obvious nods to both blues and garage, as well as such Gods of Rock as the Beatles, Led Zeppelin, and Black Sabbath. And it is both the presence of, and departure from, these influences that make the White Stripes such a pleasure to adore.

The fact that the White family has recently been elevated to MTV Darlings and yet still manages to create music so raw, so simple, so true makes this (White) Elephant an exception to the rule.