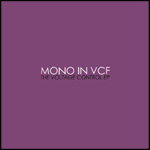 Tacoma band Mono in VCF's debut release, The Voltage Control EP tumbles out of the jewel case like a cascade of influences, with layers of sound like a crashing box of British LPs in the basement of a musty record store. The effect is jarring, conjuring a world not unlike Cameron Crowe's Almost Famous through the vintage language of Rickenbacker 330s and scream-keys, where the past of rock and roll was reinterpreted with modern subjectivity into a new object.

However, Voltage Control does not play like it was created out of posturing or copycatting. Rather, it seems more a tribute, an obviously-yet-unashamedly-inspired debut. While other Northwest bands have achieved a KEXP-pushed success this year in a similar, harking-to-the-sixties style of playing, Mono in VCF manage to push the envelope of a style that was — and probably always will be — appealing and successful, experimenting with the sounds and timbre of classic 60s/British/psychedelia and adapting it into the current indie-rock sensibility.

"Modern Nocturne" opens the record. Oasis-esque layers of guitars cover the soundscape, and as the song progresses, subtle experiments of tone and instrumentation appear over the basic riff; other melodies join, layers recede and attract. Other bands might simply settle for a limited tonality of solitary telecaster, but here listeners enjoy the playfulness and independence that comes with releasing a debut — no expectations, no preconceived notions.

The EP continues with "In Los Angeles," a lesser track focusing more on a sub-par narrative love-longing story than the previous track's layers of semi-Nigel Godrich filth. "Ultra Love" follows, and despite the track's name, is probably the most mature and accomplished track on the record. What could be easily mistakable as an Interpol or Ours cover, "Ultra Love" is based around a lovely New Order type riff, while Perales' vocal melody lays finely on top.

Musically, Mono in VCF may be too advanced for their own good. This first hors-d'oeuvre is indicative of an LP that in the future could be as irrelevant and ephemeral as a lost Brian Jonestown Massacre demo. However, where there is good there is promise, and there is a lot of good on this EP. Hopefully, a fulfilling LP will soon emerge from these Tacoma-ns

(I was going to say "Tacomen," but that read more like the name of a Little League team sponsored by a Puyallup Taco Bell).