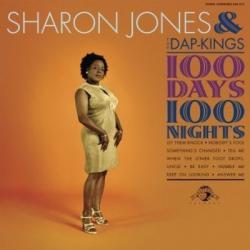 Hearing the Dap-Kings add their furiously funky sound to albums like Mark Ronson’s Version and Amy Winehouse’s Back to Black is a fine thing, simply because it helps to raise the profile of one of the finest revivalist groups around. But what those projects were missing is a real soul voice, one that divests their sharp instrumental work from the present, leaving you wondering if you didn’t just stumble across an unearthed recording from 1966.

The combination of Sharon Jones’ brash, throaty pipes with the horn-heavy attack of the Daptones is one of the premiere musical collaborations of our times. Without the other, each act would be undoubtedly relegated to studio work, doomed to obscurity outside the eyes of those of us who scour the liner notes of our CDs. Together, their albums and their fiery live shows have gained them all legions of fans around the world.

With any luck, their new album 100 Days, 100 Nights will raise their profile even more. The short (10 songs at just over 30 minutes) and sweet disc moves along at an unhurried pace, settling into grooves that slide between the punchy swagger of the Stax/Volt studio band and the silkier, sexier sound of Motown’s house band, The Funk Brothers. Above it all, stands Jones, who doesn’t force her vocals on the backing tracks, but rather nuzzles in alongside them, leaving the star power histrionics for lesser singers.

Although the best place to hear these tracks is performed live, where Jones takes full command of the stage and has audiences eating out of her hands by the end of the first song, until she and the Dap-Kings make their way to the West Coast, we’ll have to settle for these glorious, soul-stirring recordings.