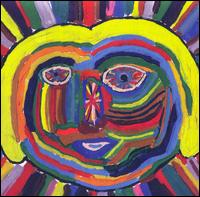 Panther, the alter-ego of Charlie Salsa-Humara, made a quick impression on people, both with his frenetic live shows and the absolutely killer video for "You Don't Want Yr Nails Done." He seemed to have all the promise in the world, channeling an alternate dimension Prince. Now it seems Panther has decided to calm down and get into some soul roots, which isn't a terrible move, yet you definitely don't get the same sort of rush from 14 kt. God as you might have gotten the first time you experienced Panther.

As opposed to Secret Lawns, which was mostly Salsa-Humara on his own, 14 kt. God brings Joe Kelly into the mix. Kelly used to be a member of 31 Knots, a band that is genrified on the All Music Guide as "math rock," one of those subgenres that has never made much sense to me. I always imagine that it's some modern rock subfield that probably features note structures with some intricate mathematical significance, kind of like when you convert all the words in the bible to numbers looking for secret messages. So, it is really no surprise that 14 kt. God seems much more experimental than you might expect.

To that measure, "Her Past the Trees" is right out of the El Guapo/Supersystem playbook of slightly off-kilter synthrock. The song never really goes in any specific direction, instead droning its way along, with vocals buried under the vaguely dance-like rhythm. Not bad, but also not anything that sets Panther apart from its brethren. "Decision, Decision" and "Violence, Diamonds" almost sound like you might expect them on a long lost Joan of Arc album, with the angular guitar that really doesn't have a melody as much as providing little riffs to keep the song alive. It is an odd direction for Panther because you can't shake the feeling of "been there, done that." "Violence, Diamonds" at least adds a bit of an unexpected bit of XTC sound to the mix, making it stand out amongst some of the other fodder.

Some of the more groove-driven tracks like "On the Lam" seem to channel the Beastie Boys. Heck, "On the Lam" is more or less "Something's Got to Give" but with a different vocal. "These Two Trees" might be the most like what you might have expected from Panther, leading off from the sounds of !!! to create a writhing, almost tribal dance song, but it never really gets off the ground. "Take Yr Cane" is even more aggressive, with such a perturbed cello taking the lead, you'd think somebody let Les Claypool circa "Mr. Krinkle" into the studio. "Total Sexy Church" might be one of the most satisfying sounds on 14 kt. God, a rollicking instrumental that has enough texture that you can keep a grasp on it (although it is about as far away, music-wise, from "You Don't Want Yr Nails Done" that you wonder how this could be the same band.)

If you're looking for the real standouts on 14 kt. God, they are probably "Beautiful Condo" and "Puerto Rican Jukebox." They both have a good, funky rhythm to drive them and Panther at least develops tension throughout the tracks. "Beautiful Condo" is the more typical modern rock song, definitely sounding like an evolutionary step away from emo-core into a more subdued dance sound. "Puerto Rican Jukebox" sounds like it shares the guitar line of "Beautiful Condo" but it keeps itself more in step with its melody and the breakdown that leads us to the chorus is about as funky as Panther gets on the album.

Really, if you want to compare two bands with similar sounds and influences, you can look no further than Panther and fellow Portland band, YACHT. Unlike YACHT, that took its sound to a more refined, pop-oriented direction on its latest outing, Panther seems to be descending into a whirlwind of directionless tracks that never really gel into anything beyond some good core ideas and high ceiling promise. I'm sure lots of the "indie rock press" will be fawning over Panther's step into the sort of aimless noiserock that they can become so enamored with, but without any real structure or flow, 14 kt. God just can't keep its focus long enough to satisfy.