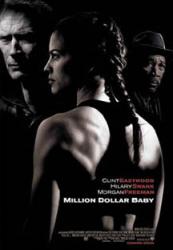 The introductory haiku worked so well last year, how about we do it again?

2004: The year that was
Dubya got back in.
Fuck! Torment! Comfort me now,
wondrous cinema.

1. MILLION DOLLAR BABY
No one is more surprised than I that a boxing movie directed by and starring Clint Eastwood would top my best-of-the-year list. A simple plot summary might suggest a darker version of Girlfight, but brilliant screenwriter Paul Haggis (best known from his TV work on thirtysomething, Due South, and the criminally underappreciated EZ Streets) turns F.X. Toole's source stories into a truly haunting cinematic tale. Eastwood plays a grizzled boxing trainer/manager who, at the urging of faded prize-fighter Morgan Freeman (in a glorious return to form after some less-than-stellar movie choices), reluctantly agrees to take a 31-year-old wannabe-boxer (astonishing Hilary Swank) under his wing. They train, he growls, she learns some resonant life lessons and deals with her helplessly white-trash family. Then the story's third act is a different thing entirely, transforming Million Dollar Baby into a staggeringly evocative masterpiece (with themes not at all unlike those explored in one of the runners-up listed below). To reveal more would be a crime and a sin.

2. LA MALA EDUCACIÓN (BAD EDUCATION)
A very close #2, the latest from Pedro Amodóvar is a delightfully perverse candy-colored puzzle that begins in the present with a story about the past, presents that story as a film within the film, then subtly meshes the two. It's a movie geek's wet dream: Hitchcock suspense with a lurid dash of Douglas Sirk melodrama and filtered through unmistakably Amodóvarian panache. Hottie Gael García Bernal appears in no less than three roles, two of which cross-dress and one of which walks around in a wet see-through skimpy as the camera lingers on his heaping crotch. This, if nothing else, should indicate that Million Dollar Baby must be damn good. imdb

3. COWARDS BEND THE KNEE | THE SADDEST MUSIC IN THE WORLD (tie)
I honestly can't decide which of the year's two Guy Maddin silent-style fever-dream films I like better. Cowards, originally a 10-part art installation and now a complete piece of sublimely wacky cinemagic, features pickled hands and living sculptures and a frequently-naked character named… "Guy Maddin". Saddest has Isabella Rossellini hobbling around in beer-filled glass legs during a Depression-era Winnipeg contest to find the planet's most melancholy music. How can I choose? Speaking of dilemmas, I love this question posed by another critic: "Why will people go to see Sky Captain and the World of Tomorrow and The Phantom of the Opera when there are real Guy Maddin movies in theaters?" Cowards review | Saddest review

4. HOTEL RWANDA
Don Cheadle deserves every Best Actor award he's sure to receive for his superb performance as Paul Rusesabagina, a hotel manager who helped save 1200 lives in 1994 Rwanda during a harrowing season of genocide: over a million members of the Tutsi tribe were killed by members of the Hutu tribe in a massacre that took place while the world looked away. Director/cowriter Terry George's film is a sobering dramatization of Rusesabagina's true story, one which heartbreakingly shows humanity at its best — and its most regrettable. imdb

5. ETERNAL SUNSHINE OF THE SPOTLESS MIND
Director Michel Gondry is an extraordinary visualist, and he executes screenwriter Charlie Kaufman's unmoored scenarios with wonderfully subtle (mostly low-tech) manipulations of lighting, set changes, and camera placement. What results is the most humane and mature love story of the year. review

6. THE INCREDIBLES
The funnest two hours of my cinematic year were spent with Brad Bird's ingeniously better-than-Marvel® creations. When a surge of lawsuits against superheroes forces the government to hide them in witness protection programs, Bob and Helen Parr (formerly Mr. Incredible and Elastigirl) settle down in drab suburbia and try to have a 'normal' family. Bob grows weary of sleepwalking through his boring job and dealing with his bastard boss, and he jumps at an offer to play the role of hero again. Danger and adventure ensue, the extraordinary family bands together, and it's sheer Pixar brilliance. The visuals are (of course) first-rate and the voice work brilliant (Sarah Vowell and Holly Hunter and even Brad Bird himself [as priceless Edith Head-esque costumer Edna Mode] are in the mix), and the subtle life lessons about rejecting workaday mediocrity are truly ones to savor. imdb

7. ARIMPARA | SCENT OF THE LOTUS POND | SPRING, SUMMER, FALL, WINTER… AND SPRING (tie)
Three lovely fables (all arguably Buddhist in nature) set in Eastern lands. London-based director Murali Nair's Arimpara concerns a middle-aged rural Indian man whose untreated facial mole assumes an unspeakably monstrous life of its own; it's an allegorical masterwork that will haunt me always. I loved Satyajit Maitipe's melodrama Scent of the Lotus Pond for its intriguing look at day-to-day life in Sri Lanka (which is even more precious to me now) and because it was the best soap opera I'd seen in ages. And Korean Ki-Duk Kim's visual masterpiece Spring, Summer… stunningly conveys a search for enlightenment through the changing seasons of life. Arimpara review | Scent review | Spring imdb

8. FACING WINDOWS
Surprising and wonderful film about an overburdened late-20s woman (fabulous Giovanna Mezzogiorno) whose struggle of a marriage is put to yet another test when a mysterious old man (late Italian legend Massimo Girotti, in his final film performance) totters into her world. As this odd friendship compels her to reflect on her life, she turns to the bookish-hot guy (Raoul Bova) in the apartment across the way. review

9. TARNATION< /strong>
Jonathan Caouette's autobio collage is arguably the best documentary of the year, and inarguably (at a budget of $218.32) the most economical. Painstakingly assembled from home movies spanning various points of his 31 years, the film is a sensitive and steadfast glimpse into a tortured family life. Caouette's self-help was (and is) a painful creativity, and with it he's produced a brutally original non-fiction meditation of confusion, despair, and naked honesty. imdb

10. VERA DRAKE
What makes Mike Leigh's latest film a must-see is Imelda Staunton's pitch-perfect performance as a cheerful soul in a rather drab life. Mrs. Drake is regarded as having a heart of gold, but she regularly performs one clandestine act of charity that probably wouldn't earn her that distinction if the family and neighbors knew: she performs abortions on working- and lower-class women. Her story is, as another critic put it, "a chilling, chilly impression of 50 years ago and five minutes from now." review

Thirty-one honorable mentions (yes, 2004 was that great a movie year) in alpha order: