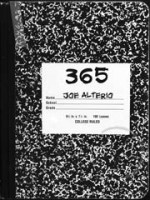 Joe Alterio lives in Seattle now, but once struggled for existence as an aspiring animator in Los Angeles at the beginning of the century. In his early 20s, he admirably, creatively kept a daily, usually three-panel grid journal of his hard-drinking, occasionally heartbreaking life there, now collected into 365, his premiere full-length comic work.

Imagine that: every day cranking out a few words and drawings based on his declining relationship (his own fault, but still melancholy-inducing to experience as we go through it with him), the incessant rejections of studios where he applied for work (Good Lord, I'm staying out of that field!), the jobs he almost got (and the stoic resolve he builds due to it), the accidents and victims that fell around him (Los Angeles seems to be on the brink of blackly comical violent collapse), the grace of strangers in the midst of chaos (truly breathtaking moments in the narrative), Joe's own kindness shown to at-risk students he tutors (very inspirational), the drunken parties and awkward pick-ups (we can all identify with), the quick breaths he took in between flights to his hometown of Boston (to visit ball-busting pals that remind him he was once that doodling little geek — they loved and still do).

This is the sort of project that a lot of us fantasize about doing, tenaciously examining the minutia of our existences, but Joe actually did it. And reading it makes me wish I would commit to something like this, and that you would too — this is great reading, pulling you in to see what happens next.

I have no doubt that like most autobiographical comics Joe sometimes makes himself appear more noble or virtuous than he really is, and that the self-depreciative tone of some of the strips is meant to make up for the fact that he is actually pretty lucky in certain departments (save getting a job making cartoons for a living, apparently). But there seems to be a genuine vulnerability that can't be faked — as well as an encouraging joy for living. Add to all that a critical intelligence, and even what could be banal material is worth reading.

At first, as good as his raw but stylish rendering is, the art itself put me off, as Joe neither ever shows his face, or the faces of those important to him. I'm guessing, but I think there's a good reason for it — in order to be so critically and honest about the things he was going through, he needed some kind of veil, and concentrating his cartooning on the backgrounds of a scene, the small details, or what was going through his own mind actually helps put the reader into the strips with him.

In the period of time the story arc occurs — 5/1/01 to 4/30/02 — so much happens to him and the country (September 11th, the initial crack-downs on privacy, the build-up to all-out war), Joe has to work hard to keep up, so the aesthetic he chose to draw the strips by works for it. It's as if you kept a drawer full of photos, movie ticket stubs, albums bought at shows, newspaper clippings, printed out e-mails, break-up letters, Christmas cards, parking tickets, et al, BUT in order AS the year occurred. That he kept up such a consistent narrative, due to him working on these every day, takes it from the realm of realistic cartooning and further into the realm of art.

This Friday, August 5th there will be a release party for the book at the Comet, with the bands Argo (who are also celebrating an EP they're putting out), Pleasurecraft, Audiopoet, and the Seaworthies playing, and I seriously recommend you try to get a copy of 365 beforehand if possible. Getting to know Joe from his comics will make you want to meet him, and thank him for letting us in so far into a life that was worthy of so much determined self-attention, but more importantly, was documented so enjoyably.