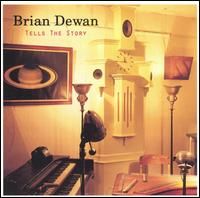 For all of you who haven’t stumbled into Brian Dewan during his musical career, I’m not sure if any description I can write will do him justice. The first time I saw the man was opening for They Might Be Giants at Axis on Landsdowne Street in Boston. None of us knew who this “Brian Dewan” was that was opening for the venerable Boston-via-Brooklyn band. What we got was a man, dressed in khakis, a white button-down shirt and a sensible tie, walking out on stage to a podium. Slowly, purposefully.On this podium was a home-built electric zither. He might have given a terse introduction, something like “Hello, I’m Brian Dewan” and he proceeded to play said zither with reckless abandon. Into our unprepared ears, he sang songs about cadavers, aliens, embalmed cowboys, bodily disfigurement and other topics generally left unsung. It was mesmerizing – Dewan was in his own world up there, occasionally making eye contact with the crowd, but otherwise just plowing through song after song. It, quite possibly, was one of the best opening acts I have even seen.

Naturally, I had to purchase Brian Dewan’s album after the show, simply called Brian Dewan Tells His Story. Simply said, there is no one like Brian Dewan in music today – and “99 Cops” is a perfect example. Here is a nerdy white man singing a cop killer song, however in this ode to/nightmare of offing police officers, the cops are (a) kissing in a tree and (b) come back to life. And the electric zither. Oh, the electric zither. Dewan’s zither solo makes the guitar sound like a pile of wet noodles being played by a blind zookeeper. The sounds that come out of that zither are sublime – both delicate and destructive.

It is hard to find hard evidence of Brian Dewan on the internet – at least of his music prowess. His albums are both out of print, so it becomes hard to prove to you the singular brilliance of Dewan, but he is a man who seems to be a recluse that has disappeared into his current career making custom synthesizers in the style of 1940’s New England churches. Indeed, he is a man who is best experienced rather than attempting to describe his bizarre genius.