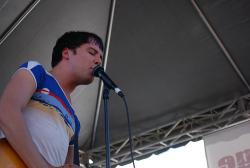 Do you know those charts that have three circles, each overlapping a little bit? If you labeled each of the three circles as "Art Brut," "The Arctic Monkeys," and "Franz Ferdinand," the little section that encompasses all three circles would be the Cribs, a three piece rock band from the UK.

Maybe the Franz Ferdinand reference is a little easy and cliche since the band's frontman Alex Kapranos produced the band's recent album Men's Needs, Women's Needs, Whatever, but it's an apt comparison. The band often adopts a bouncy swagger that mirrors FF. At other times, a few songs are anthemic rock songs, reminding me of the Arctic Monkeys and one of the brothers Jarman (all three members of the Cribs are brothers) has a singing delivery that brings Eddie Argos of Art Brut to mind.

The band has done a fine job of surrounding themselves with excellent musicians. They toured with Franz Ferdinand and Death Cab for Cutie last year and are good friends with the Kaiser Chiefs. But it isn't just who they know as the NME named one of the band's songs ("Hey Scenesters") as one of the 50 Greatest Indie Anthems earlier this year.

They definitely have a sound that fits in with the UK bands I've mentioned above, and maybe don't differentiate themselves enough from their peers, but they are still an enjoyable rock band that put on a very good live show, not flashy in the least, but very solid nonetheless.

I read an article in the NME about the Cribs recently (fortunately they were featured in the one issue of the magazine I own; I'd link to it or quote from it if I was at home and not at Caffe Vita on igDana's laptop) and the article focused on how they enjoy playing shows out of their element or comfort zone. In that case, they should have felt right at home playing this show at the Capitol Hill Block Party, sandwiched between singer/songwriters Mirah and John Vanderslice.

Most of the songs from the 45-minute set was made up of songs from the band's new album. They seemed new to most of the crowd (me included, who only gave Men's Needs… one full spin before their set), but the audience seemed to appreciate the consistent and energetic rock show. They didn't speak much between songs, but that isn't what the Cribs are about.

My appreciation of each band I saw at the CHBP increased after watching them play this weekend. The Cribs continued that streak. I'm really anxious to see them again (and they only left the stage two hours ago).