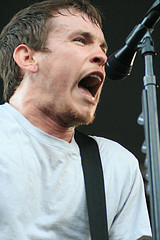 Capitol Hill Block Party 2007: Against Me!

Against Me!’s latest album, New Wave, has been the talk of the blogosphere for a few reasons. They’re an anti-capitalist punk band from Florida and many of their fans are pissed that they signed to Sire Records, a division of Warner Brothers. To many, its as if they are simultaneously raging for and against the machine. Also, people were reportedly having their computers not recognize it when they put it in their CD-Rom drives (although my copy seemed to work okay). But the final reason people are talking about this CD is because it is supposedly really, really good. The Village Voice called it a “masterpiece” and Idolator said “it will compel you to print up anti-war pamphlets and renew your MRR [Maximum Rock and Roll] subscription.”

I don’t expect to have room on my top ten list for New Wave at the end of the year, but I do really admire it. I especially appreciate the song “White People for Peace”, which is about the futility of protest songs. “Protest songs in response to military aggression; protest songs try to stop the soldiers guns…but the battle raged on.”

When they played Saturday night at the Capitol Hill Block Party, they were ready to rock. It was interesting to see that one of the most politically aware bands to play this weekend did not have a local politician to introduce them, but that really didn’t matter in the long run.

Starting out with “New Wave,” they continued to rock throughout the 45 minutes they were on stage. They played quite a few songs from the new album (which was produced by Butch Vig, who was also the producer of Nirvana’s Nevermind album). They also played some of their older favorites, like “We Did It All For Don,” “Don’t Lose Touch,” and then closed with “Baby, I’m an Anarchist.”

The final song sounded like an Irish drinking punk song (a la the Pogues), but as I was pondering the lyrics and felt a little ashamed for my passive liberal politics with the verse, which goes:

'Cause baby, I'm an anarchist,
You're a spineless liberal.
We marched together for the eight-hour day
And held hands in the streets of Seattle,
But when it came time to throw bricks Through that Starbucks window,
You left me all alone.

I started thinking of the article I linked to a couple of weeks ago on the TIG blog from The Onion about the current state of punk rock. I finally concluded that even if there actually is a rock and roll heaven, Joe Strummer is surely smiling down upon Against Me!

More photos of Against Me! at the Capitol Hill Block Party (by Laura Musselman):