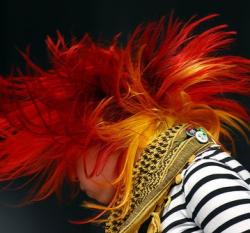 Oh Endfest — all that epitomizes the Washington alternative/hard rock scene.

Having been to many festivals this summer, I must admit, the bill must have sounded pretty "smashing" (haha) to diehard Pumpkins fans and tween teenyboppers (The Used, Paramore, etc.)- since these people appeared in great abundance throughout the day.

In comparison to years past, the line up was quite a sight to behold (including prince of folk Bright Eyes, Social Distortion, and well…the SMASHING freakin’ PUMPKINS). 107.7 The End has clearly outdone itself on this one. Many familiar faces (The Bravery, Hot Hot Heat, Social Distortion) were to be seen this year, obviously hungry for second servings of Endfest.

Perhaps the biggest change? No White River Amphitheatre! Could this have been a direct result of the Mars Volta fiasco at the mainstage last year, in which Cedric furiously exclaimed “This is the karma you get after building a corporate venue over ancient Native American burial grounds!" ("This" being after a urine filled contraceptive device was aimed neatly at him by an audience member) Nonetheless, the change was welcome and made for a large turnout, being so close to the Urban Seattle area.

Without further ado, I present Endfest’s Sweet 16! (Who in the words of Kay Kay and his Weathered Underground’s cellist, “Can drive now! Yay!”)

After parking and painstakingly jamming $10.00 worth of bills and coins, sprinting to the main entrance (only to be bombarded with a thin pile of photo release forms), I ambled over to the local stage to catch Seattle hardcore group Moneta. Though definitely not my cup of tea, the young people in the audience seemed to enjoy themselves- which is always a good indicator.

First up on the What’s Next stage was LA group Shiny Toy Guns, a group Imaginary Ed was incredibly giddy to finally see live. Their dance-y rock music, infused with boy-girl vocals, saw through the general entertainment and morale of the early afternoon.

Kay Kay and his Weathered Underground was a group I was particularly excited to see, having missed them at Capitol Hill Block Party (I was affixed to Britt Daniels face…and um…his music too!), and they certainly didn’t disappoint. I was initially taken aback by the five+ piece string section and man in rat mask, but was happily surprised by the polyphony they and crooning lead singer, Kirk Huffman, created.