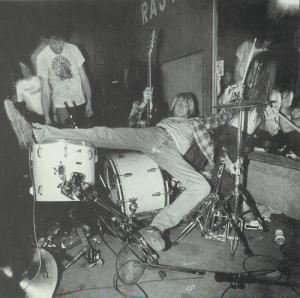 "About a Girl" by Nirvana

What can I write about Nirvana and specifically "About a Girl" that hasn't already been written? Has any band formed since 1990 had as much written about it as Nirvana has? I would venture to guess that the answer to that question is a hardy "No." So, what can I really add to the Nirvana legacy? Well, I did get to see Nirvana live once, in a hockey rink in north central Massachusetts. Those were the days when real bands played real terrible venues like beat-up old hockey rinks that were packed with real youth and ruffians. Now, my memories of that evening aren't as distinct as I'd like them to be – and no, it wasn't due to any chemical influences, it was during the hey day of my "straight edge" phase – but it was due to a large, rather heavy boot being moved rapidly into my head. This is why I don't go near mosh pits, because back in those early 1990's days, people moshed to everything, heck I went to a They Might Be Giants where people were moshing.

Well, this night, the Breeders opened for Nirvana, and sure enough, MOSH PIT! And things led to things where I happen to be in the wrong place at the wrong time and suddenly blood was all over my face and generally I was a bit disoriented. Needless to say, I spent the rest of the show on the sidelines avoiding repeated blows to the head, but I do remember that Kris attempted to beat up a guy in the crowd for groping a girl and that Kurt left his guitar – smashed – producing "end of time" style feedback at the end of the show that left me with no hearing whatsoever. Ah yes, those were the days where a good show left you deaf, bleeding, and staggering incoherently!