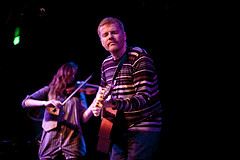 A.C. Newman's new release Get Guilty is chock full o' pop, and brilliant, well-produced pleasing pop at that. Touring in support of Get Guilty, A.C. Newman brought his band and the cheeky, but charming, Dent May & his Magnificent Ukulele to Neumo's on Saturday February 21st.

Dent May wowed Animal Collective during their time in ol' Mississip while they were recording the MUCH lauded Merriweather Post Pavilion and AC snatched him up for their own imprint, Paw Tracks. Dent May's own particular brand of music includes a ukulele, which is his sole instrument. His breezy doo-wop charm is reminiscent of Elvis Costello, but with the multi-instrumental sensibility of Beirut. Dent May, and his non-ukulele playing backing band, would be equally at home opening for an early Buddy Holly or hittin' up the surf with the Beach Boys. 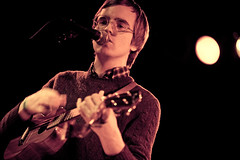 Only days before the A.C. Newman show I had pretty much professed my love for his enchanting lyrics and steady production style, so I was pretty psyched to experience this pop pioneer in person. Neumo's was crowded and people really seemed to anticipate the performance , previously being endeared by Dent May & His Magnificent Ukulele. True to the album format, they played "There Are Maybe Ten or Twelve" right off the bat, already having more bang for the buck than is present on the album. Their sound was ballsier, more rock and a wee less pop. The crowd just seemed lukewarm only a few songs into the show and I felt the slight disinterest as well. The songs sounded great.. they performed well.. but the performance seemed to lack a little punch and brightness. 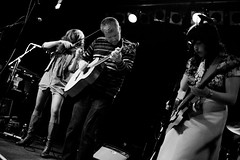 One of my album highlights, "Like A Hitman, Like A Dancer" came up third and was the strongest of the show. Live, they achieved the popping, spare, and slightly more brusque sound of that song well, much more akin to the album version than a lot of the live songs.

The plethora of people and instruments on stage created a full warm sound though, which I think was totally appropriate and needed in order to experience his songs live as they sound on the record. "Heartbreak Slides" was also a show highlight, fleshed out with tambourine, electric guitar, violin and the instrument that is his calling chorus, "Yo ho!". 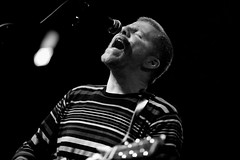 Like I've said before, I love the album. I think A.C. Newman makes pretty smart and likable music, even if you're well-versed in the art of crafting pop songs. As far as my excitement for the album translating to my excitement seeing them live, there is just a *tad* left to be desired. I hope to see A.C. Newman again in the near future, but I'll just go into that experience with a little less anticipation and a little more knowledge about the difference between his albums and his live show.