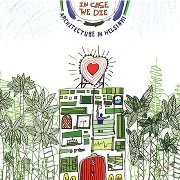 In Case We Die

As overheard on the bus one day, on the way to pick flowers. I was reading a book and an extremely tall, Sammy Davis looking fellow in a zoot suit started "rappin'" with one of his "cool kats" as they boarded the bus. I felt extraordinarily lame, what with my plaid, poetry, and Pod, but apparently the Zoot Suit Fellow had a "hot" knowledge of music.

So there are these eight people from Australia, right? And they decide they're going to start this, like, really hot band, right? So they do it, and there's remember, like, eight chillin' people on this stage they're playin' on after just a little bit of rappin' together! And they play, like this just, fucking unbelievable shit, man. It's so fresh, man. Like, just chillin' and sweet and hot all at once. It's like every genre, every single type of dance and indie shit you've ever heard, man.

This opening track, on their record, right, the record's called In Case We Die right, and the track, it's called like "Neverevereverdid." One word, like that song on that Wilco record, Summerteeth. So anyways, this track doesn't really sound like Summerteeth, but y'know, actually man, you could convince me, because this song is just all over the fucking table of what stuff sounds like. It opens with these opera-student sounding voices, and then there're all these crashes of cymbals and I think there's a theremin — A THEREMIN, MAN! — and then it just breaks into this hoppin' beat and is like the best parts of Franz Ferdinand, man.

The whole record man, it's like, so hot. So everywhere. They're girls with these voices as sweet as lickin' honey off the back of a beautiful woman at the beach. And then there's a guy with this high and soft voice like the star of his church choir in Minnesota. But Australia, right? But there's none of those Crocodile Dundee did-ju-ree-doo-das or nothin' like that. It's just every other instrument you've heard. You know that band, man, the Fiery Furnaces? You know, like they're cool, whatever, but like man, there's no SOUL! to the Furnaces, there's no of that HMPF! HMPF! to the music, nothin' to make you smile and think "Hells yes! Hells fuckin' yes!" But these cats, man. These cats has gots it!

The zoot suit fellow and his friend got off the bus, no doubt in search of a burning heart, or a electrojazzmultiinstumentalist covering Johnny Cash's "Ring of Fire" at a local open mic.

I picked up Architecture in Helsinki's record later that evening. I played it straight through, and felt like I had just finished a Ken Burn's documentary on the History of Cool Sounds and Grooves. Tracks like "It's 5!" and "Tiny Paintings" blew me away with the unpredictability of where the song would be taken, especially when, once the song had changed entirely, there seemed no other way the song could have progressed. Unpredictability is Architecture's necessity. A wonderful, triumphant smile of a record.