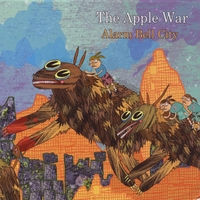 The Apple War came into existence when the founding members met in Bellingham in 2007. Upon relocating to Seattle in 2008, they recorded this engaging full-length album. Part funky post-punk, part progressive rock and a large part melancholy ballads, it is an amalgam of interesting sounds and textures.

Alarm Bell City took me by surprise. By the look of the cartoon adorned cover, I thought that this was going to be your standard contemporary Seattle indie rock, but the opening moments of the first song proved my prejudice to be dead wrong. The song, “Alarm Bell City,” is a refreshing exercise in songwriting. With scowling guitars and eerie keyboards layered on top of a fantastic drum performance, it sounds a little bit like OK Computer period Radiohead, but isn’t a shameless reproduction in the least.

“Old Thunder” has a spectral melody that is led by doleful organ notes that ring in reflective tones. The almost whispered vocals fit the mood of the tune and are drenched in late night regret. On the other end of the scale there are songs like “Sailor,” which features a snaky bass line that is augmented by more guitars and less keyboards.

The Apple War is a unique and welcome addition to the local music scene. They certainly don’t sound anything like the majority of bands that have popped up in the last few years and that alone makes them worth checking out. Besides that, Alarm Bell City is a charming debut that deserves some airtime on KEXP if it has not had some already.