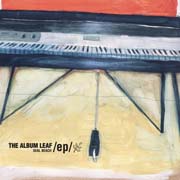 The first time I heard the Album Leaf, it was at a Sigur Ros concert in DC. Jimmy LaValle (the central nervous system behind the Album Leaf) and company were opening for the Icelandic beauty-makers.

After the first song, something off their then-new record, One Day I'll Be On Time, I remember thinking that opening for Sigur Ros is a tough occupation for any primarily instrumental group. But the Album Leaf pulled it off nicely. The DC crowd, a notoriously chatty, ADD group of young professionals and young activists, paid lovely attention and seemed for the most part enthralled with the more subtle, keyboard-filled star-gazing brand of music the Album Leaf played, before Sigur Ros came out with their popularly untitled, rock and roll approach.

It wasn't long after, that Subpop snatched up Jimmy LaValle and made the deal to put out the latest record, In a Safe Place, a record that turned out to be a loveable late-night coffee-drinking record of ambience and mood. Images of swirling galaxies and bleeding traffic lights.

But it's been a while since In a Safe Place, and Better Looking Records has released a reissue (complete with supplemental live tracks to flesh out the original recordings) of the 2003 only-released-in-Spain Seal Beach EP.

The first five tracks of the reissue include the four which made up the original EP, with an addition of "For Johnathan," from a past compilation of Various Artists. The last five are all live cuts from the tour opening for Sigur Ros. Four of the live cuts appear as studio versions on One Day I'll Be On Time, with the exception of "Essex," a fantastic live cut from a split called A Lifetime More with On!Air!Library!.

Fans of the Album Leaf will find on this record what they would expect: Keyboards and subtle melodies that weave themselves together right before your ears. Background music to driving tired through thick night. Those whom haven't yet had the privilege of hearing the Album Leaf will find a lovely introduction to a band that emblemizes what instrumental pop can be, more an askance that one listens as opposed to a forceful guitar-driven demand of attention that other instrumental star-gazers might be more aptly characterized as.