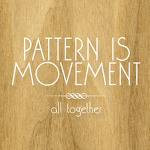 Pattern is Movement, the duo of Andrew Thiboldeaux and Chris Ward, declare themselves a math rock band, and have billed themselves as a "Two Man Wall of Sound." Both of these are true.

The Philadelphia twosome's newest album All Together is a condensed soup of sounds, although you wouldn't know it by it the appearance of the cover art. The cover sports a slab of wood, the grain specked, the font an egg shell white… but just because the outside is simplistic (like a book missing a dust jacket), don't assume what's inside isn't rich and full.

I will admit that when I first heard this album, I found it only mildly intriguing. It took a few listens to understand the so-called "mathiness" of the album (math was my worst subject anyway). But now with several listens under my belt, I can safely say that All Together couldn't be more complex and engaging. Thiboldeaux and Ward might be in the vein of minimalist performers, but their album is not unlike the hardest algorithm.

My favorite track was "Right Away." I was immediately entranced by this track for its opening note, a high-pitched whirl that sounded reminiscent of a subway stopping and starting. This howl is sustained through most of the song, pushing the beats and the short burst of lyrics along. It includes a host of instruments and plays true to the band's spirit as a wall of sound.

Although sometimes atonal, the music doesn't stray too far from unraveling into a chaotic mess. Pattern is Movement might be the first band I have heard that literally use their name to explain what they are about. Tracks like "Trolley Friend" and "Bird" (which has a twinkling piano that sounds so much so like theMr. Rogers theme it sent me into a nostalgia-induced coma) have a pattern of drums, ambient noises, and beats… and they move, and move in a very pleasant way.

They're not a relaxing band, nor are they a band you can dance to. Maybe being unsolved is what Pattern is Movement is striving for.