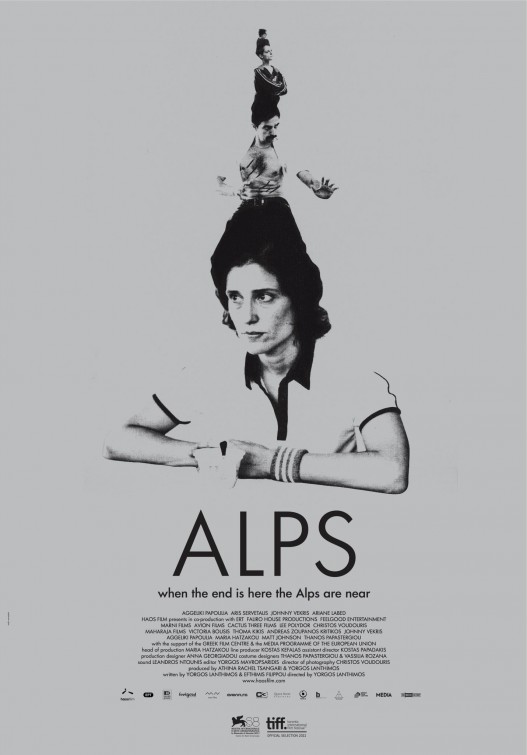 {Alps opens at the Grand Illusion Theater Friday, July 27, and screens through August 2}

Anyone whose seen Dogtooth would likely agree that writer/director Giorgos Lanthimos has a distinctive style. A crazy, strange, and compelling one that resulted in that film being nominated for the foreign language academy award. His latest work Alps follows on that tradition with a marginally lighter and more accessible result, while still maintaining serious uniqueness. Alps may not be the bizarre kick to the head represented by Dogtooth but it's certainly still worth one's time.

Four key characters are introduced in attention grabbing ways in the film's first scenes. The crew is offbeat to say the least: a rhythmic gymnastics practitioner whose only desire seems to be good enough to be allowed to perform to pop music (as opposed to heavy handed classics), her stern and bizarrely overbearing coach, a hospital employee, and a paramedic. It's unclear what their commonality is. Except for a penchant of asking personal likes/dislikes questions of the mortally wounded. Why the paramedic needs to know that an accident victim's favorite actor is (improbably) Jude Law will only reveal itself later on. Or if you read any of the picture's marketing material, which to me contains a significant spoiler I'll work to avoid.

The group goes by the name Alps – which is purposefully chosen to provide no clue as to their line of business. Which I will respect as I attempt to describe why you should give the film a whirl.

Much like Dogtooth, the visual style is unique — feeling very fly on the wall in a creepy documentary way. Lanthimos's visual language and directive approach remains distinctive with a fondness for over-the-shoulder vantage points. As well as situations purposefully evoking a sense of discomfort. Once again, the dialog feels less natural in a staccato-David-Mamet's-gone-surreal sort of way. The rhythms of the visual and dialog parts can be hypnotic. Alps brings the engrossing characters and unclear motivations of Dogtooth without so much of the ick factor that may have made that film a hard watch for some. On the other hand, it still deals with powerful themes of mourning and identity. Albeit with the occasional minor ick.

What initially seems an insane business model starts to become understandable by the end. Even though most of the participants are themselves broken in differing ways. Over time, group members get a bit too caught up in their roles and tend to exceed the boundaries set forth by the Alps hierarchy. Rebukes can be swift, unexpected and brutal. There's enough to digest and process that this odd, serious, comic — and at times moving — mishmash earns my recommendation. Even if I'm surely getting only a small fraction of the author's intent. Ultimately, it's not as memorable and intense a bat-shit crazy enjoyable journey as Dogtooth. But still worth the time. And admittedly probably significantly more accessible than the earlier film. Though that still leaves Alps pretty far indeed from more mainstream pictures…