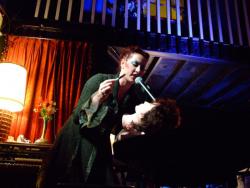 Sometimes I envy my fellow music writers who are not actually musicians themselves. For someone who is not a practicing (or recovering, as it were) musician, I imagine that every live performance they witness is a magical experience full of childlike wonder and unabashed awe at the incomprehensible virtuosity taking place before them. Or at least that's the sense I get from some people's reviews of shows that left me going, “Eh, meh.” It could be a bit like the inability of magicians to impress one another because, nine times out of ten, they know how the trick works.

All I know is that I remember seeing bands before I knew how to actually play music and being much more impressed than I am now. Maybe it's hearing the same cheap n' easy chord progressions in so many songs, maybe it's the generic, workmanlike melodies that pass for hooks or the lyrics that are vague, inoffensive placeholders at their best and ear-gouging tone poems that read like 7th grade diary entries at their worst. Or maybe it's just that I am just becoming a bitter old crank. It had to happen at some point.

Hence Amanda Palmer with Estradasphere last Thursday at the 608 Club in Ballard.

Palmer, the primary songwriter behind Brechtian Punk Cabaret duo The Dresden Dolls, is, as anyone who has seen a Dolls performance can attest, an electrifying performer, attacking her piano with more ferocity than most guitar heroes and keeping audiences wrapped around her finger and hanging on every word with more charisma than most frontmen who aren't trapped behind a stationary instrument. At Thursday night's performance, however, Palmer was unleashed from her piano for a large portion of the set and her control of the room (in actuality an artist's loft / living space) was absolute. With none of the spatial barriers presented by large venues, which have taken some of the immediacy out of more recent Dresden Dolls shows, she made full use of the eccentric 608 Club space, picking her way through the floor-sitting audience, projecting live footage of herself singing in the bathtub and in one of the house's bedrooms and performing from the balcony above the main floor like a tongue-in-cheek Evita Peron. This was obviously her element, interacting directly with fans and other musicians and obviously reveling in the pure joy of performance in an off-the-cuff setting. Palmer has drawn some ridiculous comparisons to Tori Amos from lazy critics (“Dooyyyeee … it's girl with a piano singing about sex! They is all the same! Dooyyyyyyeeee!”) but tonight I could see something of the commonality, as Palmer has partially usurped Amos role in the 90s as the Queen Misfit, the patron saint of the weirdoes who don't even fit in with other weirdoes, who has an earthy, self-effacing, immediate rapport with the odd assortment of punks, theatre kids and oddballs who adore her.

Even leaving aside all of the theatrics, audience partici … (“SAY IT!”) pation and costume changes, the thing that sets Palmer above and beyond other performers is the fact that if she sat in the middle of a stark white room wearing a t-shirt and jeans and just played her songs, I for one can't say I'd be any less riveted. As always, Palmer's mastery of dynamics and way with inventive melodic hooks is matched only by her absolutely devastating lyrics, which display a rare mastery of wordplay that drips with venom while simultaneously displaying a quality of both winking playfulness and weary vulnerability.

I didn't catch the names of all the songs, but some highlights included “Not Mine,” a haunting, beautifully orchestrated slow burn that seemed readymade for a 50's musical as directed by David Lynch and “Leeds United,” an ass-kicking barn-burner that had the entire crowd stomping along. Currently, she is in the midst of recording her first solo album, but, if I understand correctly, the set she performed at last week's shows wasn't even a preview of that material, but rather a collection of non-album songs that may be released at some point in the future. If the quality of material on display was her “b-sides,” I can't imagine how amazing the actual album is going to be.

Last but not least, while Amanda Palmer was a known quantity going into the show, the real discovery of the night was Estradasphere, the music ensemble who opened for Palmer in addition to serving as her backing band for most of the night. Recently transplanted from Santa Cruz, CA, the band is relatively unknown in Seattle, but their effortless blend of truly stunning musicianship, improvisation, natural showmanship and humor certainly bodes well for their prospects locally. Executing massive, yet somehow logical, leaps between styles, genres and instruments (upright bass, accordion, trumpet, church organ, shamizen and some truly mindblowing violin were all pulled from the band's musical armory) throughout the evening, they held the audience's attention both in their own right and as the deadpan foil to Palmer's giddy theatrics. Particular favorites included their rendition of the main theme from Legend Of Zelda that was nothing less than utterly epic, and a number of songs that recalled DeVotchka's elegant old-world romanticism. Such a high-profile (though underground) gig was a trial by fire introduction for the band to Seattle's music community and they passed with flying colors. Definitely worth checking out if you get a chance.