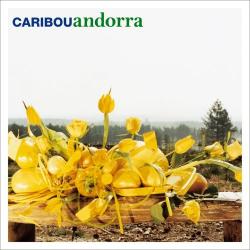 Caribou (the band previously known as Manitoba) picks up where the last two outings by Dan Snaith have left off: electro-pop soundscapes that are some of the best in the business. Sure, the first release under the revised Caribou moniker (Milkman of Human Kindness) left a little to be desired, especially after the praise heaped upon Caribou (nee Manitoba’s) debut, Up in Flames, but Andorra puts Caribou back on track. The album is a nimble mix of 60’s pop rock, electronic, and modern rock, producing a refreshing collection of pop gems.

In a sense, Andorra sounds very familiar at first listen. There are so many musical references and samples in every moment that you could swear you’ve heard it before but you’re not entirely sure where. The openers, “Melody Day” and “Sandy,” take pieces of the music of the 60’s, 70’s, 80’s, 90’s, and 00’s and blend them so seamlessly you’d think that it was some sort of time travel pastiche that the Chemical Brothers wish they recorded. “Sandy” tones it down a little, coming across more like Architecture in Helsinki on Ritalin. However, once you think it will be a non-stop party, Caribou hits back with “She’s the One,” (which features a member of Junior Boys) which might only be described as if Elliott Smith discovered synth-heavy production in the afterlife. This is followed up by the beautiful orchestra piece “Desiree,” which skirts the line between gorgeous and overblown.

Caribou takes on much more of a Beta Band persona on “Eli,” while “Sundailing” is much more subdued, more like something from Up in Flames. “Irene” is a stripped down synth-pop song that merges the eerie sounds of Third Eye Foundation with a Boards of Canada vibe while “Niobe” takes it one step further, concocting an almost Underworld-like epic to finish the album. The songs builds from a basic foundation until it becomes as close to a real barnburner as Caribou gets – it's a excellent finish to the album.

Andorra is exactly what you might expect from Caribou, a marriage of synthesizer magic and pop sensibility. However, the varied influences that Snaith incorporates into Andorra transcends its predecessors, generating an invigorating mix of musical style that will keep fans guessing what might come next. Caribou seems to be hitting its stride.