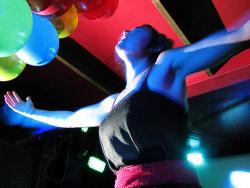 A Portland Excursion: Farewell to The Trucks (again), plus Head Like a Kite and Subtle

I was dealt a double-blow last month when I learned The Trucks and Pleasureboaters, two of my favorite local(ish) bands were both breaking up. At least in The Trucks’ case, I was allowed a chance at closure, as they had three final shows scheduled – one each in Seattle, Portland, and home in Bellingham. Pleasureboaters did not give their fans the same opportunity.

The Trucks’ last Seattle show on October 11th was among my favorites this year. “Awesome” and A Gun That Shoots Knives joined them at Chop Suey and were so amazing that I wish I could turn this into a rambling trip back through that night as well, but must stay focused.

I thought I’d made peace with the fact I’d never see The Trucks again until they took the stage, and by the time I’d made my way out of the venue I’d decided to travel to Portland for one more show.

I planned to kill several birds with one stone by staying in a hotel that is close to the very cool Wonder Ballroom (where The Trucks were to play), just a few blocks from my favorite Portland restaurant (Old Wives Tales’), and adjacent to the Doug Fir Lounge, a venue I’d wanted to check out but had never been to.

By wonderful coincidence, local favorites Head Like a Kite were playing the heavily-timbered and perfectly-sized Doug Fir that same night about 150 feet from my hotel room. Convenient.

I began my night in an unfamiliar venue with a band I’ve seen several times. I love Head Like a Kite, and my inability to capture any essence of their music in photos is frustrating, especially since their huge sound is difficult to describe. I think they sound like musical time travelers, spinning through decades and bringing back and squishing together the best of all they experience.

Head Like a Kite draws you in, and at the Doug Fir I saw that literally was true as people drifted down the stairs and gathered at the stage, filling that weird empty-space stage bubble that sometimes occurs early at shows. Even though Seattle HLAK shows often feature lively guest appearances and the occasional group of brightly-colored dancing creatures, favorite songs like “Listen Young Stunners” and “No Ordinary Caveman” were at least as captivating coming from just Dave and Trent.

If you close your eyes at a HLAK show, you’ll be tricked into believing a hundred people have joined them onstage and they are all pitching in to create a wave of intoxicating, tightly controlled sound. Open them, though and you’ll find something like this:

Head Like a Kite is a great live band and were hitting hard and true. I nearly forgot about The Trucks, until…

Near the end of HLAK’s set I felt a sudden sense of urgency, and knew my careful planning was about to be undone. I somehow felt The Trucks’ posted set time was a horrible lie and they were going to start early, so I tore myself away and dashed upstairs to grab a cab. The Wonder Ballroom was just a few miles away, and I was quickly there, walking in the door as The Trucks were being introduced, indeed early. Their first song began as I reached the stage, where there miraculously was an open spot right near Marissa.

The Wonder Ballroom held a larger audience than I’d seen at any other Trucks show, and the Siren Nation celebrants cheered the lovely ladies of The Trucks, dancing and singing along through the entire knockout set.

I saw The Trucks five times total, which was not nearly enough. They pack a surprising punch live and are sweet and vicious and funny and they rock. Favorites “Titties”, “Zombie” and “Shattered” left me satisfied and much less sad than the Seattle show, able (hopefully) to make peace with the loss of this irreplaceable band.

Thank you, The Trucks, from all of us who love your music. And thank you for going out in style and with respect to your fans, giving us a few last shows to cherish.

As I wandered out to the sidewalk, I realized it was early enough for me to potentially catch Subtle if I quickly returned to the Doug Fir, so…

Back to the Doug Fir Lounge and past the kind door guy that believed my earlier wrist-stamp had been over-stamped at the Wonder Ballroom. As I descended, Subtle started their lively set, sounding to my then-tired ears like cracked-out Red Hot Chili Peppers meets Xiu Xiu, so of course I loved them.

Adam 'Doseone' Drucker is a fascinating frontman, with a super-fast tongue and a prowling way of exploring the stage as he checks audience members’ jugular pulses, inspects the inner workings of plastic statues, and borrows cute purses.

Had The Trucks started as scheduled, I would have missed Subtle’s Portland show and I needed it as a prelude to their set at Nectar I was seeing the following night. They’re a lot to digest and are incredibly fun so I was more than up for seeing them twice. Their Portland show is a bit of a blur at this point, so I’ll take that chance the second show gave. More later on Subtle.