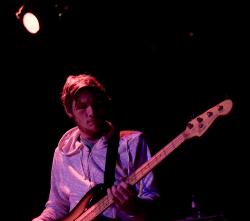 Meet the Flower Children of Generation X: Architecture in Helsinki

On a Monday night, wasn't much happening in this town – most people were still recovering from the weekend, especially the pre-Halloween showganza that had been going down the last few days. Neo-hippies in the know, however, were at the Showbox dancing like Phish had been resurrected in a post-grunge electronic discotheque.

One of the main things that this six-person band brings to the stage is a sincere joy in playing their music. Seeing people who are genuinely happy to be on stage makes a show almost automatically enjoyable, a striking contrast to the stiff or blase attitudes that the Arctic Monkeys and the Decemberists have brought to Seattle this last year. The folks of Architecture in Helsinki are not afraid to sing "aye, aye, aye – woo woo!" in place of misanthropic lyrics because they're confident in the sound that backs them up. The quality of music over a quantity of records has always been a hard sell, but Architecture in Helsinki doesn't seem to mind – and they thanked the audience over and over for being there to listen.

I couldn't count how many instruments were on stage because the band kept switching up who was playing what, but their rule of thumb was that least one person must bounce through the middle of the stage with an instrument at all times. Then either a trombone must be playing, or someone must be beating the crap out of their drum machine (it crashed on the floor at one point), or everything must sound all at once! The combinations were endless, and barely any pre-recorded sounds were used; when the instrumentation & Kellie Sutherland's voice started approching ecclesiastical heights (going higher and faster) during "Heart it Races" without losing any of the quality from the lower pitches, a sort of awe fell over the sea of dancing heads and for a second or two the audience wound down to really listen.

Slow moments like that were few and far between, however. The way Cameron Bird and Kellie Sutherland would alternate popping up and down like the piano keys they kept pounding, it was like a trampoline was hidden in the Showbox's stage and they weren't sharing! Imitation being the sincerest form of flattery, there were tidal waves of dancing heads and thrusting bodies rushed up and down the length of the stage and all throughout the audience – and no matter where you looked, a smile graced every face. Leaving a show sweat-drenched and grinning is a great solution to the blahness of Monday, and listening to Architecture in Helsinki's elaborate kitchen sink pop is a fabulous way to arrive at that goal.