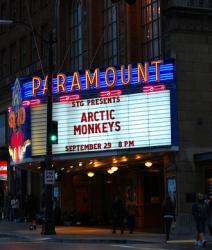 Fake Tales of Seattle: The Arctic Monkeys at the Paramount

“This band is so good” I told my friend more than a few times during the Arctic Monkey’s Saturday night set at the Paramount. On occasion I would throw in an adjective that begins with the letter “f” for good measure.

And really, they were good (that same descriptive word Erik Gonzalez also struggled with using), but after some reflection the show left me feeling cold. It wasn’t as though I didn’t enjoy it. The band was tight and they played songs I enjoy skillfully for more than an hour. The Paramount was a good choice of venue (moved at the last minute from WaMu Theater) because the band’s sound filled up the venue, of course it is by design, but also because the crowd was not terribly large, so it was fairly comfortable on the floor. It was maybe 2/3 full.

For 70 minutes, the Arctic Monkeys rocked the Paramount playing 19 songs (no encore), which is about what you could/should expect. They played basically an even assortment of songs from its two proper albums, Whatever People Say I Am That’s What I’m Not and the latest Favourite Worst Nightmare. Between-song banter was at a minimum, really only a “we’re the Arctic Monkeys” (really?) and a few “this song is called…”s.

The anthems sounded fantastic in the large ballroom. The audience gave a fine effort in providing the call-and-response backing vocals for “Fake Tales of San Francisco.” That, along with the current radio hit “Fluorescent Adolescent” and “I Bet You Look Good on the Dance Floor” sounded larger than life through the Paramount’s PA system. With the Arctic Monkeys, they write songs that are meant to sound anthemic and epic in whatever venue they are currently in.

One thing with the crowd I found alarming was the hurling of random pieces of footwear. Every few moments you would see a shoe or sandal flying through the crowd. It's the first time I’ve noticed it at a show – and I hope it is not a trend that continues. No one wants to be hit in the head with someone’s flip-flop.

I just can’t help shake the feeling that the Arctic Monkeys treat rock stardom as a job. They put on a (wait for it… good, solid show – so no one should feel cheated. They are definitely good at their jobs – but I’m good at my day job, too, but I still do just enough to get by.