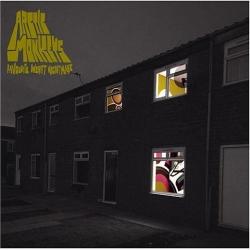 Music can be like cars a lot of the time. There are cars that are flashy, sexy, and possibly questionable and dang, they're exciting. There are a lot of cars that are good, reliable, and soundly constructed — but they don’t get you excited. The Arctic Monkeys, to me at least, are the latter: They are the Toyota Corolla of modern Britrock. I can sit down and listen to their new album, Favourite Worst Nightmare and feel that it is: (a) good; (b) tight as an overwashed pair of jeans and (c) catchy as all heck. So, why is it that I can’t get excited about the album? Why is it that there isn’t really a song on the album that makes me want to listen to it over and over?

Trust me, I’m baffled about this. This is part of the reason why I’ve been sitting, contemplating this album for so long. I’ve been trying, desperately, to have an opinion about Favourite Worst Nightmare beyond “well, good." However, that is the most I can muster. There isn’t any particular song that stands out in my head, in fact, I sometimes can’t even tell the difference between them. They have a lot of energy (the oddly titled “Brianstorm”), they have hooks (“D is for Dangerous”), they are a lot of fun (“Fluorescent Adolescent”) but none capture my imagination like close relatives like Franz Ferdinand’s “Take Me Out” or even the Arctic Monkeys’ own “I Bet You Look Good on the Dancefloor.”

A few that stand out in my mind when pressed with the issue might be the subtle “Do Me a Favour,” a song that doesn’t attempt to be so ‘balls to the wall’ with its presentation. Instead, it has a nice bittersweet flavor that mixes well with the almost 60’s rock feel. The same could be said for “505,” a little more restrained song that almost has a U2 feel to it. “The Bad Thing” is a little more spasmodic, setting it apart from the dance numbers until that song even gives up and heads out onto the dancefloor. Beyond that, I really couldn’t offer much specific description of the songs beyond “catchy dance number.”

In that sense, the Arctic Monkeys are a perfect pop band. All this talk of the Arctic Monkeys being something akin to a modern versus of the Smiths sort of confuses me. I kind of equate the Arctic Monkeys in my head with Oasis or Robbie Williams or Coldplay: they sure know how to write songs that people can groove to, that they can enjoy in the arena settings they are born to inhabit. However, they really just feel like they lack any real insight or emotional depth that makes a hooky song into something that will stand up to the rigors of time. Favourite Worst Nightmare is a good album, don’t get me wrong, and all things considered, I’d rather have the Arctic Monkeys selling out arenas around the world over All Saints or James Blunt, but really, the style feels absent of substance sometimes.