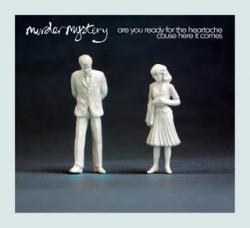 Are You Ready for the Heartache ‘Cause Here It Comes

Sometimes it is very hard to get past your first impressions, especially when it comes to what you are reminded of when you hear a sound. Murder Mystery is a lot of fun; they write catchy pop songs that have a “rough-around-the-edges” charm that fits in well to the lineage of the Strokes or Television, but really, when I hear Murder Mystery I hear Beat Happening if Calvin Johnson was (a) more sane, (b) not addicted to lo-fi, and (c) a Beatles fan (or, at least, a more obvious one). Is this a wrong impression to get from Murder Mystery? I suppose that is my cross to bear, to forever hear the band and think “Calvin Johnson, meet your alter-ego: Pop Rock Man!”

Of course, it doesn’t hurt Murder Mystery to have recorded an album with a great title. Say it with me now: Are You Ready for the Heartache ‘Cause Here It Comes. It is awfully nice of them to warn us of the impending heartache, so plus three points for that foresight. Musically, Murder Mystery, although not truly a one-trick pony, might have failed out of Advanced Pony Trickery, as, to an extent, if you’ve heard one song you’ve heard ‘em all. This is not a bad thing, just a warning to any of you who are looking for extreme dynamism from the New York City band.

Let’s start with the real gems: “Love Astronaut” is a post-New Wave pop classic, sort of like Fountains of Wayne meets Calvin Johnson (sorry, I’m beating a dead horse with that, but I can’t get past it; however, if you think about the cover of Beat Happening and the title of this song, you can see what I mean — it is like the Free Masons or something). The song has a swirling keyboard line and some great self-deprecating modern rock lyrics like ”I go looking for love but is it looking for me?” delivered by vocalist Jeremy Coleman. “Tell Me I’m Your Man” is pure pop rock majesty, like Elvis Costello on a tiny budget. “Honey Come Home” is like the Strokes-Lite or '50s doo-wop meets garage rock, and Murder Mystery pulls it off, same as “In a Sentimental Mood.” On “Sooner of Later,” Coleman somehow pulls off playing both Johnson and Julian Casablancas, swerving the song back and forth from his usual baritone vocals to a falsetto before crashing headlong into the song-ending guitar solo.

I discovered that a big part of the charm of Murder Mystery might be Coleman’s distinctive voice, as “Baby, You Can Write Me a Letter,” with bassist Adam Fels on vocals, just sort of falls flat. Nothing personal, but Coleman’s voice is just so captivating that he can take a pretty by-the-numbers song like “Cold, Hard Workin’ Man,” for example, and make it fascinating. I think that it helps get past the repetitive nature of a lot of the Murder Mystery tracks as Coleman adds so much personality to the songs. He brings the songs back from the brink of boredom, much like what Josh Caterer did with the Smoking Popes.

All the cute, Converse-wearing kids will love Are You Ready for the Heartache ‘Cause Here It Comes because not only does it have a DIY feel to it, but it just has so many pieces of the collective modern rock memory that you can’t help but find something appealing. You can hear that Murder Mystery, in their core, have a lot to offer, although their debut can sound like the same song repeatedly if you’re just passively taking in the music. However, it is the little nuances like Coleman’s vocals that make Murder Mystery a potential up-and-comer.