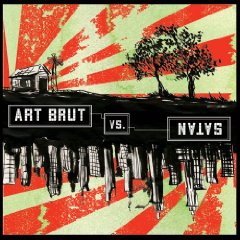 The primary complaint I’ve been hearing against Art Brut’s new album, Art Brut vs. Satan, is that it’s not as fantastic as their debut album but merely “good” or “great.”  Art Brut is a fantastic band and even their weakest material is head and shoulders above most other bands out there today.

Bang Bang Rock And Roll was solid gold, a witty mixture of Post-Punk musicality and rock deconstructing lyrics. The follow up album, It’s A Bit Complicated wasn’t gold, but it was still shiny. This latest release is also shiny and I enjoyed it quite a bit.

Art Brut is witty and genuinely fun, something that feels rare in the musical world these days. Their music is post-punky guitar Rock with strong pop hooks, which on its own would be OK, but it’s front man Eddie Argos who gives Art Brut its character. I don’t know quite where to begin with this man. For one thing, he’s one of the greatest front men I’ve ever seen in my life. I still look back on the Art Brut show at Bumbershoot 2007 as one of the highlights of that year. Not just the festival, the year. This is because Argos has charisma pouring out of his being, I don’t know where it comes from, probably his nostrils—that’s where most people hide their charisma, right? At one point in the show he dove into the audience to dance with them, taking the microphone with him so he could still sing.

Another thing that makes Art Brut so great is their lyrics. I’ve rarely encountered such perfect deconstruction of rock music in the form of rock music. It’s too perfect for words, but I’ll give it a go. On their first album, Art Brut penned an interesting song about sex, drugs and rock ‘n roll, while simultaneously singing about how sex and drugs and rock ‘n roll are boring subject matter for a song. The kicker is that the song was actually really fun.

Art Brut songs are strangely matter of fact and even sometimes completely banal, while still being fun, engaging songs. How do they do this? An example of this from Art Brut vs. Satan is “The Passenger,” which happens to be about how much Argos loves public transportation and “DC Comics and Chocolate Milkshake” which is about, well, you get the idea.

The thing I’m most concerned about with this album is that Argos seems to be spying on my thoughts. Not all the songs are direct windows into my head, but enough of them are to give me pause. Example one: “DC Comics And Chocolate Milkshake” I love both DC Comics and Chocolate Milkshakes (though I can’t drink the damn things without becoming ill.) Example two: “Slap Dash For No Cash” I don’t understand why everyone wants to sound like U2. Example three: “The Replacements” I also just discovered The Replacements and am wondering why it took me so long to get around to this. Sure it’s hardly a life tapestry, but after hearing this album I’m wondering if Argos and I might get along if I were to randomly meet him in a comic book shop or record store.

Not that I identify with everything. Alcohol gets Argos into several sticky situations on this album, from the fast paced opener “Alcoholics Unanimous” to the one night stand hangover party of “What A Rush” to the albums lugubriously long (at seven minutes) closer “Mysterious Bruises.” I listen to Argos sing these songs and really start to wonder if alcoholism is as fun as he’s making it out to be… oh wait, from the sound of the things he’s saying, it sucks. I recommend this album. It’s a fun ride, and it stands up there with the rest of Art Brut’s albums. If you like them already, or are looking for something refreshingly matter of fact, this album is for you.