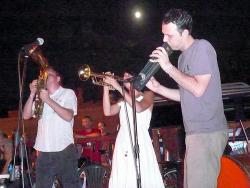 Athens Popfest is like summer camp for indie pop and rock nerds. We all convene in the college town famous for several musical revolutions once a year for such activities as sing and clap alongs, eating tasty food from any of Athens finest establishments, record hunting (last one there’s bummed out they missed the copy of Of Montreal’s the Gay Parade on vinyl at Wuxtry!), and of course, dancing around to old and new favorite bands.

Here are the highlights from Wednesday’s shows! (Disclaimer: I had a slight, ok major, personal trauma happen on Wednesday – see below, which caused me to miss quite a few of the bands. I’m having all the photo people here add stuff to the TIG Flickr Pool, so you’ll be seeing stuff I missed! Also, personal traumas aside, it is nearly impossible to see every band, so if you happened to see any of the bands I missed, please let us know your thoughts in the comments field!)

The festival officially kicked off Wednesday afternoon with a fantastic set from Brooklyn’s Boy Genius. I’d met the band the previous night at a bar (very typical for Athens, as unlike CMJ or SXSW, the entirety of Athens Popfest resides in 3 square blocks) and made sure to get to Little Kings (the afternoon venue) nice and early. I was blown away by their swells of metallic fuzz and feedback topped with luscious boy girl harmonies, reminiscent of Pavement, My Bloody Valentine, and the Pastels.

Next up were Amo Joy! who reminded me quite a bit of early Fishboy, mixed with bits of early Elephant 6 recordings with their hyper pop occasionally slipping into a psychedelic audience participation noisemaker freakouts. 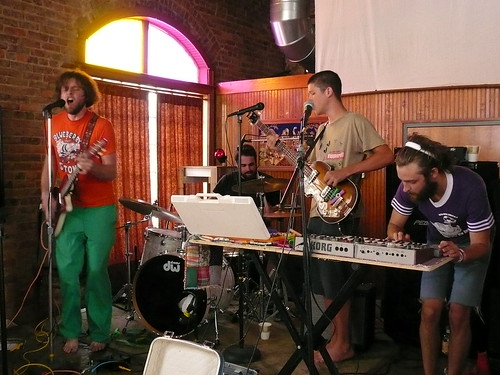 Following Amo Joy! were one of my current favorite pop bands, Cleveland’s Afternoon Naps. I’d only seen them perform live once before, when I happened to be visiting Cleveland. Their Beach Boys and 60’s bubblegum influenced boy/girl harmony organ laced songs about cats and hating school have tugged at my heartstrings and they’re not letting go.

Here’s a video of their song “I’m So Happy” that was featured on their Cloudberry release (now out of print) earlier this year. If you’re not “so happy” after hearing this song, then I’m really not sure what to tell you.

Gainsville’s Oh Sanders followed Afternoon Naps. This was their second year at popfest, and I quite enjoyed their new songs, filled with new wave guitar and keyboard lines and dancey beats. 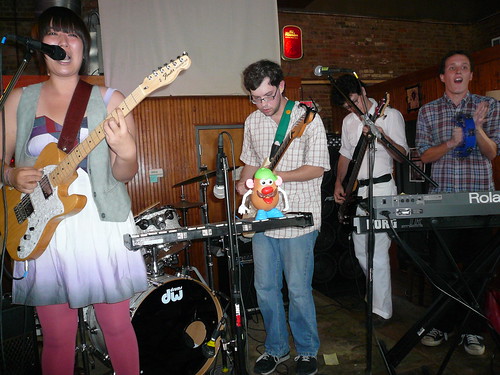 The evening show kicked off with Supercluster, which happened to be an Athens supergroup, with members of Pylon, Casper and the Cookies, and tons of Elephant 6 related projects, which was quite a surprise. Their country swagger meets melodic 80’s swoon (similar to REM, and well, Pylon) charmed my heart.

Next up were Blondiegrunt, which was St. Louis’ fantastic Bunnygrunt covering Blondie’s Parallel Lines in its (almost) entirety. A few songs were shortened (one just to its chorus) and cut, but they did invite Nate from Cars Can Be Blue as a guest rapper on “Rapture”.

During Blondiegrunt’s set, I realized I’d lost my wallet (which I never found all week), and proceeded to panic for the rest of the night, but I knew my panic couldn’t interfere with the amazing Nana Grizol who immediately followed with an amazing, powerful, and energetic set out on the patio of Little Kings. Their inspiring set sounded like at times like a mixture of an orchestrated Weakerthans (with their “let’s go scale a building and have an adventure! punk ethos) and the horns infused hyper pop of David and the Citizens (they featured a tuba, clarinet, trumpet). If Theo from Nana Grizol had asked me to drink the proverbial Kool-Aid, I would have in an instant. Here’s a video of their song “Tambourine in Time.”

Following Nana Grizol were Happy Happy Birthday to Me’s newest signees, Manchester’s Hotpants Romance, who were in fact wearing hot pants and sounded like a next generation version of riot grrl, except for the whole hot pants thing.

Due to lost wallet panic I unfortunately ended up missing the rest of the night, but it provided me a slight respite to have the energy to do it all again the next day.