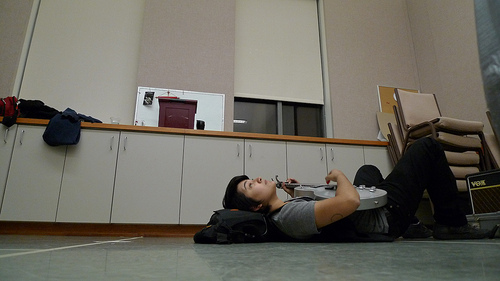 Now that the rest of the music community has moved on to bigger and better things, it’s time to take a look at last month’s adventures in Austin for SXSW 2010. Everyone is back, rested, over the post-festival flu, and digging their proverbial heels into favorite finds — here’s some of the highlights and likes (as well as a few dislikes) from this year’s trip, in no particular order: 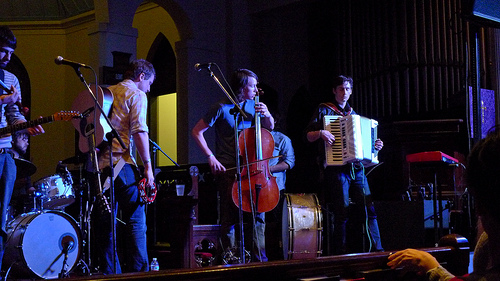 Our favorite seven-piece alt.indie.orchestral conglomerate of goodness, Hey Marseilles, did Seattle proud in Austin this year, playing what seemed like a dozen different showcases over the course of three days. Each performance was spot-on, right up to and including Saturday night’s rooftop-blowing-off official at St. David’s. HM ran the rooms, raged every single performance, and left us giddy with anticipation for the release coming up later this year. If you weren’t able to see Hey Marseilles (or your exes) down in Texas, you can come by The Tractor on May 22 (21+) or to the Vera for an all-ages show on May 21. Tour dates abound — more news, mailing list and goodies here.

There are very few bands that could take a crowd to a state of rapture at an indoor mid-afternoon performance in the middle of a bunch of discussion panels at a Convention Center, without being a national-act-turned-secret-performance. (Run-on duly noted.)

We’re happy to report that The Middle East are one of those bands.

Witnessing only half of the set was still enough to see how well this Australian outfit pulled everyone upright by their very heartstrings — upright, hanging on to each lyric, pausing from the constant influx of texts and handshakes and let’s-do-lunches to give them the attention they deserved. Heart-searing lyrics, flawless layered vocals and a strong instrumental presence did well to represent everything we love about the recent EP, and then some. Between scrawling down lyrics and making mental notes for the next epic mix tape, we found out The Middle East will be coming through to play Sasquatch and a Portland show next month. All the news that’s fit to consume can be found here. 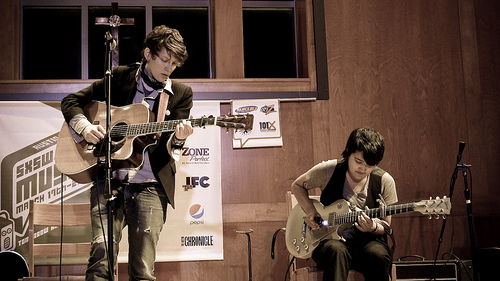 Another stunning highlight of the weekend, Chris Pureka (with accompaniment across the weekend’s showcases from the uber-talented Andrea Alseri) gave us intravenous injections of the most epic alt.americana songwriting we’ve ever loved to be saddened by. She’s all the best parts of your favorite singer-songwriter, minus the whine, plus the reckoning force of unbridled, unabashed emotion ringing through every moment of her performances — both lyrically and musically. Pureka, like Hey Marseilles, flawlessly pulled off several performances a day without batting an eye, playing each one with everything she had in her person, almost as if each were the first and last one, all at once.

There’s much, much more to be said about Chris Pureka’s talents, and we’ll be doing so soon by way of the upcoming review on her tremendous new album, How I Learned to See in the Dark. In the meantime, sign up for everything she’s got here, and check the tourdates while you’re at it — her national tour for next week’s release of How I Learned to See… starts this week, and will likely be stopping within driving distance of you. Make the trip. It’s worth it. We promise. (And we’re talking to you too, Seattle.)

Not much to report here, other than the fact that hitching an occasional full-speed five-dollar ride without a seatbelt on the back of a golf cart was pretty rad.

Welcome to your new non-negotiable. Nico Stai, whether he’s stripped-down solo or (more likely) shredding the stage with a full band, is the greatest thing we’re pretty sure you’ve never heard of. He’s a six-foot tall, fully-electrified, big-guitar wielding sad bastard, putting a tornado of sound behind the lyrical equivalent of the most broken of your busted-up places. With instruments on full throttle and the vocals and bandmates to match. Go buy everything he’s ever put out. And then get to one of his shows — Nico & Co. rarely make it out of LA, so this month’s jaunt up the west coast is a rare treat, indeed — Seattleites can experience the bliss first-hand at the Fences show on Aprill 22nd at Chop Suey, where Nico will be playing second of three. 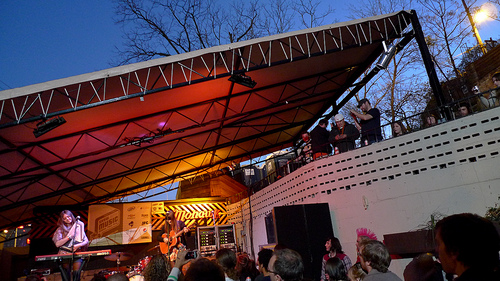 Here goes nothing on this descriptive. Ready?

First Aid Kit are a two-piece, two-gal setup (think subgenre: Teagan and Sara -slash- Smoosh in the stripped away, punk-girl vocal stylings sense) with minimal instrumentation and  smart, coy lyrics. One would lend them to having glove compartments full of mixes with folk favorites of their parents’ day as base for learning harmony and pitch, with the rest full of badass girl bands, a few Kim Deal-centered Pixies tracks, and some current buzz-band sounds to round the whole thing out. They were playing in Austin as first of four or five at one of the popular big-headliner nighttime shows, and even though we only grabbed about a half a set, it was enough to make note of and add to the see-them-when-they-come-through-town list. Lucky for us, they’ll be in Seattle at the Vera on June 5th.

(Take note that their MySpace lends them to a much more folky lean than they actually project live, and thereby doesn’t do them proper justice. Just saying.) 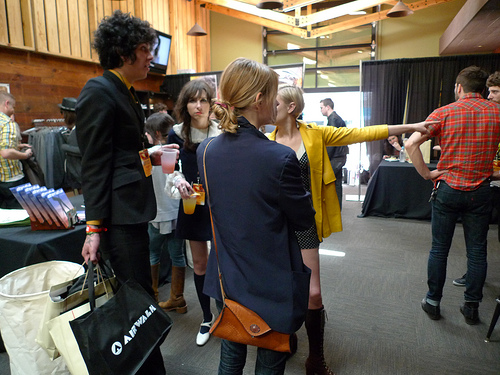 Just like the golf carts: these things ruled. Being fortunate enough to be traveling through Austin with some friends in high places, we had the pleasure of popping into some parties and gifting suites that just made the whole trip more top notch. Brunching, booze-ing and BFF-ing = win, win, and win.

Rounding out the list is a quick blip about a band we saw accidentally while we waited on the Roky Erickson / Okkervil River set: Plants and Animals. Having obviously heard of them and about them, but not having listened to too much by them, they win the “band we sort of knew but stumbled on playing live and subsequently were impressed by” prize of the weekend. On the slim chance that they’re not already on your radar, P&A are definitely worth a $10 ticket if you can catch them coming through your town — Seattle’s in luck, as we’ll have them at the Croc at the end of May.

That’s a wrap on all the goodies. To keep it real (but not to do too much hating), we’ve got to be fair and list a few of the let-downs of the fest as well: Local Natives, a big must-see going in, wound up putting on a less-than-impressive set at Emo’s — they sounded more like a mash-up of a half-dozen buzz-bands than they did on the tracks we’ve heard of late, where they really sounded like they were putting together something very much their own. And like Good Old War, the fun and impressiveness of what was good about them got lost on a stage presence that left much to be desired, both in cohesive appearance and the actual delivery of their art. Sadly, because we were rooting for both.

Aside from a run-in with some questionable pitas at a local food truck, everything else was on the up and up — the SXSW staff was ever-present and ever-helpful, the maps were spot-on, and every show was (almost) military-show precise. Hearts, Austin. We’ll see you next March!

{Huge, huge thanks to everyone who made this year’s trip possible, with extra love to Laura Musselman for the loaner camera and Christen Greene for bringing us on all-access. Hearts! We couldn’t have done it without you!}