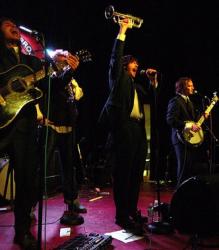 Because of an unfortunate turn onto Aurora, my friend and I had gone clear to Fremont and back before finally making it to the Vera Project Saturday night, causing us to miss the first of three openers, Andrea Wittgens. Not missed, however, was the irrevocably feel-good music of Central Services, who lucky feature Ms. Wittgens on keyboard and backing vocals.

Seeing Central Services at the Vera was reminiscent of the night I first saw them at the now defunct Paradox in Ballard, opening for Say Hi to Your Mom. Clearly, these guys (and girl!) have been around for a while, and have the chops to show it. They twee-d and pop-ed themselves through an enchanting set for the all-ages crowd just before Sean Nelson took the stage.

Some photos of the band…

I’m a big fan of Sean Nelson and his band Harvey Danger; so naturally, seeing him perform solo was a huge treat for me. With a voice dramatic enough to stir the inner sentimentalist in anyone, though never lacking in the ever present humor and irony in his songs; Sean took the crowd through several songs and Kinks covers, some hilarious and some ridiculously sad. “How much longer do I have?” he asked as his time slot came to an end, “20 minutes? 3 days? Eternity? What?” True story: Sean Nelson is the man.

At the expense of sounding like a total moron, Awesome! is exactly what the band is. There’s no philosophy involved here, though I’m sure David Nixon (banjo/vox) wouldn’t mind it, seeing as he holds a doctorate on the very subject. Awesome really does put on a freakin’ awesome show.

Each of the seven members of the band clearly hold enough musical talent to fill a bucket, and combined. Some of the instruments in the band's arsenal include the trumpet, banjo, theremin, along with your archetypal guitar, bass, and drums-, which combined to make a sound lovely and happy enough to make one fall in love with everybody in the room. From the insanely hilarious and vaguely intellectual and terrifically sardonic banter between various members of the band and audience, to the numerous vocal tradeoffs between several of the guys (all with strikingly brilliant voices), and ridiculous gravity defying dance sessions, Awesome was a winner.

Awesome eased the spirits of its so called “septuagenarian” audience (yes, I looked that word up and in retrospect, the line by one of the members made no sense at all, though it hardly matters because I’m sure no one knew the word anyhow), and the end of the night saw Dr. Nixon all in a fury, performing his interpretive this-is-what-I-got-a-doctorate-in-philosophy-for dance.

Lots of laughs and giggles were parted at this show, along with photos, as Evan Mosher (vox/trumpet) took some snaps of the audience from on stage as the Awesome-ness neared end. Then it ended. That wasn’t Awesome, but Awesome is, so waiting for another Awesome show shouldn’t be too bad.