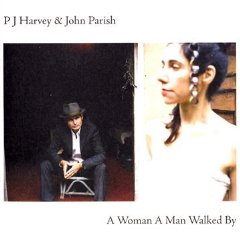 A Woman A Man Walked By

The last time that we had a collaborative album from PJ Harvey and John Parish was in 1996 with the wonderful Dance Hall at Louse Point. For that opus, she wrote all of the lyrics and performed the vocals and he wrote the music and played almost all of the instruments on the record. Thirteen years later, A Woman A Man Walked By follows suit with the same formula as its predecessor, and once again highlights the nearly untouchable talents of these two artists.

The music on A Woman A Man Walked By is an amalgam of rustic nowhere folk and gritty urban blues. Harvey sounds resigned during many of her performances as she did on 2007’s plaintively bleak White Chalk. However, her characteristic rage comes out in full bloom on several of the songs, making this a dynamic and memorable album. The high wire act between sorrow and anger is mastered and managed seemingly without effort by Parish and Harvey on this powerful offering.

On the downtrodden and reflective side of things, there is “Cracks in the Canvas,” a succinct piece of poetry where Harvey speaks over organ and tremolo electric guitar. She sadly recites the lines “I’m looking for an answer, me and a million others. Disbelievers. Deserted Lovers. Dear God, you’d better not let me down this time.” Just when you feel your own heartache mounting, she adds the finishing touch with the last line, “Cracks in the canvas look like roads that never end.”

Similarly, “Leaving California” addresses the feeling of alienation, but this time does so in regards to being ensconced in a foreign country. Here, Parish provides some acoustic guitar and eerie phantom piano as Harvey cuts straight to the chase with the verses “California killed me. I think it’s time to leave. I told no one I’d stay.” The mood is not dissimilar to that of White Chalk, but the music is slightly less stripped down thanks to a subtle, but apt arrangement.

A Woman A Man Walked By also has plenty of bile and frustration. “Sixteen, Fifteen, Fourteen” features a classic vocal performance by Harvey. Her vocals are steeped in a spleen that so few are capable of capturing on record and Parish as usual knows how to accompany the singer in such an unsettled state. The song ends beautifully and franticly with the line “There is no laughter in the garden.”

“Pig Will Not” raises the ante even more with a riveting electric performance that is in the vein of “Long Snake Moan” from 1995s To Bring You My Love. Once again, Harvey let’s out an avalanche of fury across a tapestry of loud drums and grimy guitars. She hasn’t sounded this rabid in years. The rancor that marks some of these songs is both commanding and absolutely brilliant at the same time.

This album is an incredible work of art — no surprise, as John Parish and PJ Harvey have worked together on and off for twenty years, either in the context of releasing a joint effort such as this, or with Parish contributing to her solo records. They clearly know each other and compliment one another so well, and this release showcases the two at their best. Whatever path PJ Harvey chooses to take next, hopefully it will include the vital contribution of Mr. Parish.