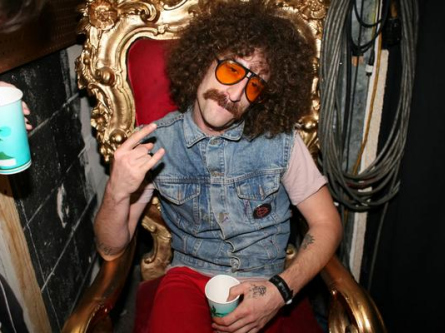 There can be parts of an artist’s story that makes any critic steer clear. In the case of Beardo, finding that he’s a white rapper who rolls with Mickey Avalon should be enough to make me pass on him and be held blameless. Yet, I took a chance to listen to a few songs after someone I trust recommended him by mentioning that he was the opening act on Snoop Dogg’s most recent tour and was compared him favorably to Paul’s Boutique-era Beastie Boys (which I guess is a starting point for every Caucasian dude who thinks they can rhyme).

When you listen to Beardo’s music, you hear stories of LA junkies, lowlifes and losers mixed in with his own paranoia; drugs are often involved. After a few minutes spent with his single “John Lennon”, I found myself singing along with the ridiculous (and ridiculously catchy) chorus. Beardo’s music has a consistent narrative where his sleazy background and style gels with the ne’er-do-wells he rhymes about. Beardo puts the conversations you overhear at bus stops to a verse and his rough delivery fits with the scene he’s documenting. The beats Beardo uses are as sleazy as he probably is but they fit with what he’s getting across. “Snort Your Drugz” has him spitting out his own verses over the beat to MIA’s “Paper Planes”.

I was listening to NWA’s Straight Outta Compton album last week after reading a book on the history of hip hop culture and I didn’t think they were glamorizing the gang lifestyle, only documenting a scene that most responsible people want to avoid (but may secretly find intriguing) over some great beats by a bunch of emcees who really can rap. The same thing happens listening to Beardo, although to a lesser extent. Using pawn shops for a source of gear is common in DIY indie rock scenes, in the universe Beardo lives in it’s a source of income.

I don’t like the rest of the bill Beardo is a part of on Monday night at the Showbox at the Market. Mickey Avalon is a terrible rapper who raps about all of the cocaine he’s doing or the slutty women he’s screwing. He’s going to pack the Showbox with people who could care less what any critic says – and maybe that’s for the best. If someone says they disapprove of the crew Beardo hangs with, it could either mean they’re turning their nose up at him (does he ever not look high in a photograph?) or that they’re listening along.