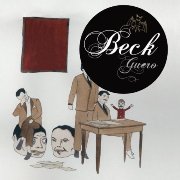 For the record, I prefer "Gwhere-oh" as opposed to "Where-oh." According to the second track on Beck's newest record, the pronunciation is actually closer to the latter.

Guero, (pronounced however you'd like; most people know what record you're talking about), is most aptly described as a single-disc box set. As a prolific, dynamic songwriter who has matured and changed over time with each of his records, broad expectations of "What is he going to do next?" accompanied the release of Guero.

Beck has gone from the crazy eccentricities of his breakout single "Loser" to mind-bending dance rock on Odelay, to the Radiohead-tinged intimacy on Sea Change. And on Guero, Beck compiles elements of seemingly each of his past seven records. Standout tracks on the record parallel whatever the listener's favorite Beck album is — huge Sea Change fans will find themselves drawn to the track "Girl" for the similarities between it and the Sea Change track "Sunday Sun." Only after thinking "Girl" might be the best track on the record will they realize Nigel Godrich (production wizard of Radiohead and Sea Change fame) had a hand in the mixing process. And indeed "Girl" is a fantastic track; but then again, I thought Sea Change may have been the best record of 2002.

The first track off Guero is "E-Pro," a little taste for the Odelay fan in us all. The catchy guitar riff, the semi-danceability: it's so very familiar. Oh, oh, wait…here comes another Odelay-esque moment in "Black Tambourine" a few tracks later. And then of course the single "Hell Yes" is eerily familiar to Beck circa 1996.

Come to think of it, "Black Tambourine" could have been on Mutations too.

Guero might not be the next step in Beck's long walk down the road of musical maturation, but it's a nice little side-step shuffle dance before he moves on to whatever else he has up his sleeve.

In any case, Guero, however you choose to pronounce it, is a good record. It's enjoyable, it's fun, it's Beck as an unfinished Rubik's cube, with all colors showing on all sides.