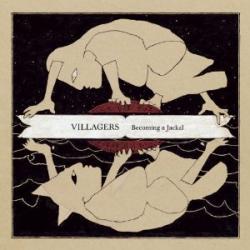 The first album from Ireland’s latest export Villagers has been lavished with tribute from the New York Times and NPR, giving much early Stateside attention for these lads from Dublin. Becoming The Jackal features 11 songs filled with shrewd lyrics about “longing on trial” in all manner of ways, sung with very gentle melodies from frontman Conor J. O’Brien, and set to spare acoustic-based compositions occasionally massaged by strings and keys. For an area of the United States where Hey Marseilles and The Decemberists always receive fervent welcome and Jonathan Richman could probably set up residency, Villagers should thrill Seattle-ites.

Becoming The Jackal opens a little deceptively too grim, with one of the more assertively mordant tracks on the album, “I Saw The Dead,” with piano trills and violin reminiscent of Bernard Hermann setting the scene for a paranoid scenario in which a man rents out his soul to ancients a la Faust. It’s easy to get a little frightened by the imagery of “back rooms where I saw the dead,” wondering how gruesome the details may get further on, but it may all be metaphor, even in a line like “you take the torso and I take the head.” It ends with the sound of tape breaking perhaps, or perhaps a head being lopped off and falling in a basket.

Pretty bold way to start out. And the album continues to create dramatic tension with the title track, which hints at ritual human sacrifice and violent manipulation (“where the jackals preyed on every soul / and tied you to a pole”). This one’s less a horror soundtrack than a tom-tom tumbling gentle anthem, but it’s still a contrary sequence of subject matter to most full-lengths, as these two grimmer tracks would have probably been held till later on albums by The Smiths or The Triffids. (Take note of musical names just dropped.) The album gets much lighter later on emotionally on earworm-attacking pure pop tunes like “The Pact” and “Set The Tigers Free” (two more of my very favorite songs of this summer now).

O’Brien’s voice has been reminding people of Bright Eyes and the music of all your classic Scottish post-punk troubadours, but there are times even American folk-rock lovers-not-fighters like Richman and the underrated Steve Forbert can be heard in the sparkle and smarts of the almost pre-rock respect for form. If you start the album and expect the darkness of the first half to only inspire playing when wishing torment, the second half will have you coming back for more lines like “I’ll be standing by the sidelines with a sandwich and a beer” set to tunes as toe-tapping as when you first heard Belle & Sebastian or Aztec Camera. That’s a strong assertion, but I recommend getting into Villagers early so you can possibly find a boy or girlfriend by playing them their music. (I recommend the songs not about corpses or bloodthirsty animals for that.)