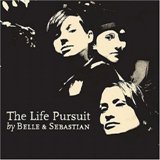 Belle & Sebastian are a one trick pony. There, I said it. I've been listening to them since the beginning, since Tigermilk got everyone's attention. I've always liked Belle & Sebastian. They're cute, they're fuzzy, they're like muppets but, you know, Scottish and human. There's nothing empirically wrong with them or their music. Then why is it that I've never loved a Belle & Sebastian album? I mean really LOVED one. Is it me? Or maybe Belle & Sebastian have perfected creating the "pleasant but not remarkable" album. That being said, their new album, The Life Pursuit, is still a fun listen, full of more energy and mirth than you might expect from the Stuart and the gang.

Let's get it straight: The Life Pursuit can be rollicking, an oddity for Belle & Sebastian. The best tracks share more with "Your Cover's Blown" than with downers such as "Get Me Away from Here, I'm Dying." It is still heavily steeped in 1960's and 1970's pop music, but more like the Kinks and the Zombies than Nick Drake or Simon & Garfunkel. This theme is set early with "Another Sunny Day" that sounds like the name implies: light and carefree filled wall to wall with vocal harmonies, charming guitar solos and witty lyrics. This is just the tip of the funloving-ice berg. "White Collar Boy" is a toe-tapping gem that borders of New Pornographers territory. "The Blues are Still Blue" has so much swagger for Belle & Sebastian you wonder where its coming from as Stuart sings you can put some money on it/you can place a little bet/that when I see my washing/the black will be grey/the white will be grey/but the blue will be blue. At times you can almost fool yourself into thinking this is a lost Matthew Sweet song. It just gets stranger from here. "Sukie in the Graveyard" is the standout track on the album – filled with organ hooks, rapid-fire lyrics and arena-rock guitar and bass solos. Honestly, I didn't even know Stuart had it in him, taking it up that notch to make a pure-pop dance song that would make the Monkees proud. "For the Price of a Cup of Tea" is an infectious number with rollicking organ that mingles with a cheerful guitar line and playful falsetto vocals that ends with a blast of horns. It is this kind of expansion of the Belle & Sebastian sound that makes The Life Pursuit appealing, you're not just left feeling that everything is so restrained as most of the band's oeuvre has been on albums past.

Sometimes they get a wee bit carried away, as in "We are the Sleepyheads" and "Funny Little Fron" which are be a little too cute for their own good. They both sounds like it might be comfortable on Sesame Street right down to Stuart forced rhyme on "Funny Little Frog": you are my girl and you don't even know/I am living out the life of a poet/I am the jester in the ancient court/and you are the funny little frog in the throat (pronounced, for some reason "throw-et"). "Song for Sunshine" channels 70's Stevie Wonder with a thick organ line that just never gets going fast enough to be hooky and the vocal harmonies feel empty next to contemporaries like the Earlies.

A few songs revert back to more of a typical Belle & Sebastian sound. "Dress Up in You" is a quiet song that is backed up by a gentle horn section which dances behind Stuart and ladies' vocals in a Burt Bacharach style. The album opens with "Act of the Apostle" whose gentle sound and somber tone sound out of place once you get farther into the album, however the bridge for "Act of the Apostle" begins to hint at the more carefree tenor of the disc. It's sequel, "Act of the Apostle II," changes the style a little more, reminiscent of a gentler version of Roger Miller's "King of the Road." The closing song, "Morning Crescent" again takes a page out of the power-pop bible, with gentle drums mixed with rolling bass and gentle plunking of piano. It is suggestive of Camper Van Beethoven songs like "Sweethearts" or "All Her Favorite Fruit" right down to the slow, southern style guitar solo.

The Life Pursuit is an uneven album for Belle & Sebastian standards. That is not to say its bad – it's actually quite a good album, but for every star like "Sukie in the Graveyard," you also get bogged down by filler like "To Be Myself Completely". However, the mere fact that Belle & Sebastian are taking a stand to expand their sound beyond the merely "cute" that dogs many of their releases, but it makes A Life Pursuit an album worth at least an initial examination. It doesn't particularly stand out in the already well-regarded Belle & Sebastian discography, but neither does it dull the luster of the trophy case.