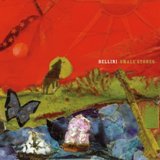 Certain recordings are magic. There's simply something captivating about them; merely mentioning their names can cause something deep inside of you to stir. Although Bellini's Small Stone doesn't quite make it into this mystical category, it does come damn close. This is the band's second full length and it's as honest and haunting as it visceral and obstinate. Small Stone marks a shift in the band's sound. While Bellini remains dark, aggressive, postmodern, math-punk, Small Stone is far more subtle than their previous recording.

Drummer Damon Che left the band while in the middle of a song on the first night of their first tour. He was replaced by Alexis Fleisig (Girls Against Boys, Soulside) who learned the songs on the road — quickly solving Bellini's unexpected rhythm quandary. Losing a drummer of Che's caliber may seem like a mortal blow, but listening to this newest recording makes it clear that it worked to the band's advantage. Small Stone is tighter and more cohesive, while band members seem to have more negative space to work with. Every sound counts.

The recording begins with the slow build up of "Room Number Five". As that track ends with Giovanna Cacciola exclaiming, "It won't be hard and I'll be glad to face your life as it was mine," it's clear that Small Stone is something very important and worth listening to. In many respects this record sounds a bit like a less obtuse Shellac with a more energetic and possibly more poetic PJ Harvey behind the microphone. The seventh track, "Smiling Fear" begins with guitarist Agostino Tilotta playing something that you might hear in a supermarket if you frequently shopped in hell. In fact the recording is full of sharp guitar punctuations and sultry vocals that play on these riffs like children on a jungle gym. All the while Alexis Flesig (Drums) and Matthew Taylor (Bass) hold the foundation down with a thundering rhythm section that allows Tilotta' guitar work and Cacciola's vocals to be evocative and disjointed yet fluid. Small Stone is a record that will get inside your head and taunt you. It's like an infection, a virus, but well worth catching.