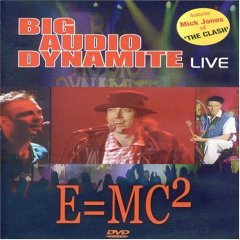 Filmed in 1990, this DVD features a short, tight set by ex-Clash frontman Mick Jones and some flashy young players who helped him after his solo-band ups and downs in the 80s. (That includes weathering backlash from Clash fans who wanted a reunion and a near-death experience near the close of the decade.)

The concert does show Jones’ strong suits as an energetic performer of hip-hop inspired rock music. BAD were the first rock band to use a turntable (at one time manned by underground fashion guerilla and punk documentarian Don Letts) and fluid pop art songwriting; unfortunately, it may be easy to blame BAD for mainstream dance club-inspired bands like Jesus Jones as you see his colorfully clad boys dance, pound on synthesizers, and squeal some leads. A viewing of this might actually work in their favor in these days of New Rave.

But Jones was never an elitist, and his closet hippy stance is apparent in the topical ideas of meta-political tracks like “Medicine Show” and “The Globe” and loving vibes throughout the electric performance, as the songs are stretched to a long tangled groove and explodes with a perfervid cover of “1999” unavailable elsewhere. Sweaty, a bit tacky, but wholly inspiring.

{buy it on Amazon}