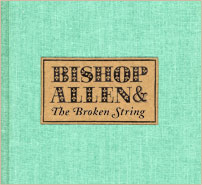 I've been listening almost exclusively to The Broken String for about a week straight now, and my conclusion? It's fine. It doesn't make me jump and skip in circles around my room (cause, you know, that's what I do when I'm super excited about a record); it doesn't make me want to slice off my ears in a Van Gogh outburst; it doesn't really make me anything. Which is, again, fine.

The songs range from giddy and poppy in a Femurs kind of way (see "Click, Click, Click, Click") to Saps-like tales ("Like Castanets") to Maria Taylor-esque lullabyes ("Butterfly Nets"). Bishop Allen is officially two dudes, Justin Rice and Christian Rudder, but the Maria Taylor-esque-ness is courtesy of Darbie Nowatka, who provides backup vocals on some songs and lead vocals on "Butterfly Nets" — which is actually my favorite track on the album. If Darbie Nowatka releases an album anytime soon, I'm likely to jump and skip in circles around my room, y'know?

"The Chinatown Bus" is also a big winner, and inspired me to do a little research when I realized they were indeed speaking of the popular low-cost shuttle the runs between Boston and New York. (Turns out Bishop Allen is currently based in New York but has past ties to Boston. Sup, homeys.) It employs a Bright Eyes-like driving storytelling style, a la "Method Acting," and mid-way through it features a line that I inexplicably can't help but sing along with: "Every single one of them named Jennifer." Every single one of what? Yeah, dunno. But it's catchy! "Corazon" is an ode to a found piano in the same way that The Decemberists' "Apology Song" is an ode to a stolen bicycle, telling an elaborate story about where and how said piano was discovered and subsequently rescued. "Shrinking Violet" and "Like Castanets" experiment with regional music styles, the former sounding a bit like a swampland front porch banjo ballad and the latter like an urban Mexican fiesta song. If there's a hit among the mix, it's "Rain," an upbeat pop number with ironically sunny vocals and harmonies over a dance-y beat. This has pop classic written all over it, and would wisely be the album's lead single.

Perhaps the reason that The Broken String never makes me go gaga is that the songs are so wholly different from one another that it's as if they don't go together. I find that I like certain tracks quite a lot, but when they all come together as a forty-minute listening experience, it's a little disconnected, and just as I ease in to one kind of sound, the next song begins and goes in a completely different, unexpected direction, when in many cases I would have liked to have stayed and explored a bit more where I was. All in all, though, thumbs up to Bishop Allen.