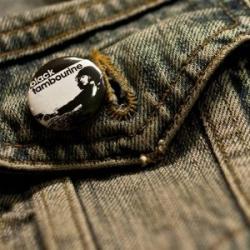 It’s neat, neat, neat that both Dum Dum Girls and this reissue, reissue, repackage of Slumberland’s debut rerelease from 1999 are both out the same week (this one). Black Tambourine were the late 80s American neo-C86 root-band for femme-led raw-sounding indie, based on the mostly-on-tape bands that spread like mushrooms in the wake of the New Musical Express mix-tape giveaway under that number-name (C86, a follow up to 1981’s NME’s C81).

See, we all read the damned British papers back then. They really kept up on (small, cool) things, and promoted tiny labels and bands with minority voices whilst taking the PR piss out of pre-grunge machismo rock of the big statements. The way that screamo would later appeal to baggy-clothed boys prone to caterwauling about “nothing left inside!” but about a decade earlier (girls always mature faster than boys), the women-driven jangle-fuzz concrete island of these groups were bound to inspire gals from Washington D.C., to Olympia, the former giving the scene Black Tambourine, made up of Pam Berry, Archie Moore, Brian Nelson, and Mike Schulman. (Berry would later go on to help create foundational fanzine ChickFactor and Moore would land his band Velocity Girl on Sub Pop, more dialectically indie-pop moments threading into the 90s rock scene.) This happened in the heart of very-male Dischord territory, but it did not go unnoticed by many on both sides of the Atlantic, and back across the states. A little bit of Orange Juice swirled in a whole lot the Jesus and Mary Chain, it was new and tasty.

Does the legend hold up? Yes, Berry’s vocals are either icily-nonchalant or warmly-nihilistic, floating just a bit above the proto-shoegaze fray of stark-mod “Black Car,” revenge kill scenario “Throw Aggi Off The Bridge,” or visceral put-down “We Can’t Be Friends.” But is there love? Of course, but don’t slobber on her black leather thrift store jacket. Best that affection be shown in a cover of the 50s power pop chestnut “Heartbeat” or in the awesomely-rediscovered missing demo “Tears Of Joy.” Even Suicide got a lost treatment (“Dream Baby Dream”) which rounds out this essential 16-song canon by the brief exhale of very cool blue mentholated smoke known as Black Tambourine. The six previously uncollected tracks (two earlier takes, four found nuggets) make this irresistible to anyone who has been delighting in bands like the Vivian Girls and Tea Cozies.