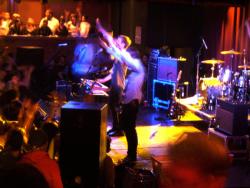 On Monday night, three imaginary Boston contributors hit the sold-out dance fest that starred Black Kids and Cut Copy at the Paradise Rock Club. The Cure was playing the arena down the street, creating a parking nightmare that caused us to miss the entire set from local openers Mobius Band and the first few songs from Black Kids. But we made it in time to get the gist, and here's our three-way round-up of the night.

imaginary ash: Parking was a bitch so we missed the beginning of Black Kids. My fault, but really The Cure's fault.

steele: I was just going to say it's The Cure's fault.

jer: Yeah, blame it on The Cure.

ash: Ok. Black Kids were adorable! And it was such a bummer that the crowd was just standing there in typical Boston fashion. People don't dance here.

steele: It's hard to dance at the Paradise … all weirdly spread out. Plus I don't think Boston people can dance.

jer: Yeah, especially when it was as packed as it was.

steele: A lot of finger pointing and air punching, side stepping.

jer: Well, for Cut Copy. There wasn't as much during Black Kids.

ash: Reggie from Black Kids has the same hair as Jose De Lara from Protokoll. I think it's the same dude leading a double life.

ash: But anyway, yeah, people didn't really shake it up for Black Kids. Except the dude straight across from us on the other balcony.

steele: And he was wearing a Cut Copy shirt!

ash: I think maybe nobody knew Black Kids, so they weren't totally into it. It was clear that everyone was there for Cut Copy, whereas all three of us went in knowing just Black Kids.

jer: Yeah, i'd say most were there for CC … but Black Kids had a sizable crowd. Last two times I was at the Paradise there was nobody out for the openers. In fact, I'd say the crowd just for Black Kids was bigger than the crowd for RJD2.

steele: And the RJD2 show was even on a Saturday night. This was a Monday night.

ash: Oh yeah, it was mad sold out.

steele: I know it! I've never seen that many people at the Paradise before.

ash: Steele, i think you were the one saying that the last "sold out" show you went to there wasn't nearly as packed. There seem to be varying degrees of "sold out" at the 'Dise.

steele: The crowd also was super diverse — it was full of indie hipsters but also had some fratty guys … and that guy in the windjacket who thought he could dance …

ash: Oh yeah! And I saw a few industrial types, which wasn't surprising once i heard Cut Copy — they were so Depeche Mode-y.

ash: Oh! Back to Black Kids — did anyone else notice Reggie's voice cracking like crazy during the higher parts of the chorus on "I've Underestimated My Charm Again"?

jer: I probably didn't… was that towards the end?

ash: It was well masked — that's why i mention it. Like, they showed occasional signs of road fatigue, like a band that's been playing shows every night for months and months. But, they kept it real. He pushed his way through and modified the chorus as needed. And it was cute and endearing, not awful as it could have easily been.

jer: This is the first time they've really toured. Or, at least, they had never been to Boston before.

ash: This is their first North American tour. Their CMJ showcases were impossible to get into — they were one of the big must-see bands there. So they're on the rise bigtime. They also made Rolling Stone's 10 to watch in 2008 or whatever that list is. (Same one Nicole Atkins made last year.)

jer: Does anyone know how old the Black Kids are?

ash: I was guessing very early 20s. Reggie especially looks very young, and their between song banter reflected a certain youthfulness, like they were new at this — with this = life — but again, in a charming and cute sort of way.

steele: But at least they could have a conversation with the audience … it wasn't awkward and stilted. I tried to find their ages, but the internet (for once) is not helping. Maybe it's a big secret and they're actually 45 or something.

ash: But their songs are so clever! I love that they change things up; they surprise you by taking a turn instead of repeating.

jer: Yeah, based on their videos and such, I feel like Reggie is poised to become a superstar. He seems like the center of attention in all the interviews.

ash: I wonder if he's the main songwriter. It's funny to see these kids who were barely conscious in the '80s writing music that sounds straight out of that decade — and be so good at it!

jer: Yeah, that's true. Reggie said somewhere that "I'm Not Gonna Teach Your Boyfriend How to Dance With You" is autobiographical. But that could just be referring to him writing the lyrics, I don't know if he's the main music writer.

ash: So Black Kids ruled and were mad fun and adorable. What about Cut Copy?

steele: Their lead singer sounded so much like the lead singer for Depeche Mode. It was kinda creepy actually.

ash: Yeah, their sound sor
t of teetered between dance-y '80s pop and industrial. Like, the beats were industrial-ish but the synths seemed more '80s style. But I kept thinking Cut Copy would be nothing without their knobs and gadgets.

ash: That was kinda their whole base from which their sound was born.

steele: They are an electronic band after all.

ash: I guess i just thought that it was nothing i hadn't seen before, and in fact was the kind of thing i could do myself. And ain't nothin' wrong with that. Seems to be what the kids like.

steele: Their knobbery is very cool, yes. That concert was certainly a-bumpin'.

jer: Yeah … they had good energy. I feel like lots of people who see them tell other people they are amazing live.

steele: Whereas we had no idea what to expect. I was overwhelmed.

ash: Their songs are all a little same-y to me — they seemed to be a one-trick pony, where Black Kids were more exciting and varied.

ash: And it was hard to tell whether the sounds were coming out of machines or instruments. For instance, the bassist didn't seem to touch his bass during the first song, yet the song was full of bass. I overheard a guy near me comment about that to his companion after the song too, so it wasn't just me.

jer: I don't think he came out for the encore either.

steele: He didn't I don't think. Cut Copy has that New Wave sound. It's also super clubby. I'm listening to their single "Saturday" right now … it's the kind of song I would have heard at a college dance party.

ash: Definitely a fun-time band. I'd not race out to see them again, but i'd also not be opposed. They were enjoyable enough.

jer: Yeah, it was really interesting.

ash: Just not overly compelling to me, whereas i'd race out to another Black Kids show. I could watch them for hours.

steele: Yeah, Black Kids had a lot more to offer in terms of different styles. They seem to have more staying power.

jer: It's hard for me to think of the last time there was a band that didn't even have a full length album out that I was this excited about.

steele: Yeah, seeing them live made me like them a lot more actually. I was pissed when they were over

ash: They were engaging and full of spirit.

steele: That electronic beat … that got faster and faster? Right?

jer: Yeah, something like that … I remember someone coming out onstage and starting music on a computer or something … back by the drums.

steele: There was a laptop back there.

jer: It was weird … it kinda goes with the idea that they have all this music playing when they're not even playing the instruments.

steele: They were big loopers too. Without that technology, they would never be the band they are.

jer: Yeah. That's why I felt like even though they had '80s sound, they could really only exist today.

jer: Both bands had an abundance of hand claps too.

ash: I think you just pinpointed why i don't really think they're that special.

ash: Ha! No, before that. Music can come out of machines these days, instead of instruments, and though that can sometimes yield excellent results, oftentimes it's very much the machines being musicians. And the people using them are incidental — could just as easily be you and I.

jer: Yeah, I almost felt like their guitar and bass were just there for the image, so people don't just dismiss them as "electronica."

ash: Anybody with Garageband can push buttons to make sounds, and it's fun when you're the one pushing the buttons, but sometimes less interesting if you're the listener.

jer: Yeah, especially when it's booming like crazy. It's like you have so much power at your fingertips.
Apparently Cut Copy is releasing an acoustic album later this year.

steele: if they released an acoustic album, they would be a different band.

ash: I think they would benefit from focusing less on technology and more on song structure and variation. But, then again, they got a sold-out Boston audience to dance like they were on Dance Party USA, which is a feat.

steele: Yeah, they don't need to do that … yet. They have a formula that sells. Why do more work?

jer: They definitely do have something going.

steele: I mean, I went home after that show and downloaded a lot of their stuff. Two of their songs made my "Rocks My Socks" playlist.

ash: I should listen to their recorded stuff — perhaps it would excite me more.

steele: Actually Jer and i were talking about it … their recorded stuff lacks the intensity of the show. But it's not bad … their new album is pretty good. It's super catchy.

jer: Yeah, I thought the recorded stuff wasn't as good.

steele: Do you guys think that the pairing of the Black Kids and Cut Copy is a weird concert? Because I kinda think it is.

jer: I thought it was really natural at times too.

ash: But yeah, as it progressed, I did feel like they would appeal to different audiences; but there are overlaps, so i guess diversity is good.

steele Yeah, it depends. You don't want to hear the same kind of stuff all night.

jer: Most of the tour is in England.

ash: I would like to see Black Kids headlining.

steele: I think when they have more stuff, they def will.

ash: Yeah, i guess that's a tall order from a band without a proper full-length. Word has it Black Kids are huge in England already.

jer: Yeah, that would make sense. I'm sure Cut Copy is huge there too.

steele: Plus they're Australian.

ash: I bet Germans are cuckoo for them.