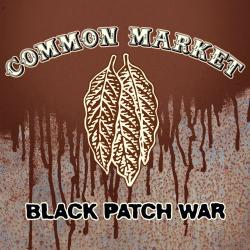 There's nothing like hearing an act that you've been rooting for finally get it all together. Common Market's (RA Scion and DJ Sabzi) self-titled debut album was good… not great, but good. Now, before you think I'm trash-talking Common Market here, let me plead my case. No matter how many times I've listened to the album, it just never seemed to click, like something was out of phase, flickering in and out of reality. You'd get absolute gems like “Connect For” or “Trinity” and then a bunch of tracks that fell a bit flat. Maybe I was unjustly comparing it to Sabzi's other act, Blue Scholars, whose debut was approaching perfect. In any case, I had a lot of hope for Common Market, and Black Patch War gives us a taste of that promise fulfilled.

Black Patch War is just tight. Tightly produced. Tightly rhymed. Tightly packaged into seven songs. It just feels so much more focused than anything Common Market has released. The title track is an aggressive protest song that borrows some of Jay-Z's Black Album vibe, with Scion sporting a sizeable chip on his shoulder. Of course, modern urban radio would be terrified of it because it's (a) intelligent and (b) lacking enough faux-pimp/gangster posturing. “Watership Down,” using a smeared soul sample to wrap about Scion's verses, espousing a lot of great one liners like ”they'd be afraid of death if they had something to life for,” and “Red Leaves” seems to partner with “Watership Down,” with its more optimistic tone (albeit subtle). It is kind of fun to hear Common Market trying some big sound like on “His Eminence." You could almost picture the 10' tall neon sign flashing “Common Market” behind Scion and Sabzi in the video. On the flip side, “Trouble Is” is some of the smoothest sounds that the act has put to tape (hard drive?) and could be the high point on the EP, coming across like southern hip-hop with a brain.

Common Market are taking a big step forward with their Black Patch War EP. The songs come across as much more together and focused than anything they've recorded before and its this evolution that takes Common Market from another intelligent hip-hop act to a duo with a voice of their own.