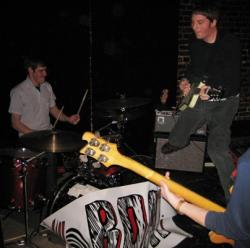 BOAT with "Awesome" and Fishboy

Some nights, no matter how early you try to get out the door and on the road, there are delays. Parents, significant others, roommates, phone calls, small animals, crock pots, or simple procrastination – all have been speed bumps in past attempts of that thing called “being on time” that I’m so freakishly bad at.

Friday night, however, I was en route to the Comet Tavern with a half hour to spare – just enough time to find parking on a bad night – and feeling mighty pleased with myself. Then… BADUMP! Badum-badum-badum-shhhhhhhhhhhhh. If you’ve never heard this sound, bully for you. If you have, you know the amount of swearing and tire-kicking that’s involved because you are now unavoidably delayed due to a tire that’s U-shaped instead of nicely rounded. Luck sprang in a tad late, however, when I wobbled four blocks back to my house and ran screaming into the house, "I NEEED A CAAAAR! (pls)" then dashed back out a few minutes later with keys to my sister’s Honda. So, this review is brought to you by the loveliness of my Angela.

When I finally got to the Comet, my dismay knew no bounds when I found that Eux Autres had completely finished. Imaginary Liz soothed my disappointment by pointing out that they’ll be back in town someday, apocalypses aside, since they’re a Portland band and we like them. If you caught their set, please let me know how it went!

Thankfully, Fishboy was just starting to set up. They opened with kazoos from Archie Mcphee's dangling from their mouth or taped to their mic, then proceeded to contort their faces in curious ways throughout the set. Before the TIG show announcement, I’d never heard of the Texas band; by the first song, I was raising an eyebrow and wondering why not – it was peppy, poppy, and the band sings with smirks in their voices. When I was poking around online for an idea of what I’d be listening to, I ran across a blurb by Sam Machkovech (from the Stranger) who called Fishboy’s lead vocalist a “dweeb rocker.” It’s a good description – the nasal quality of Eric Michener’s vocals are perfectly suited for odes to taqueria girls, and the fast-paced snappy pop combinations in Fishboy’s songs indicate an attention to small detail without getting bogged down in it. As the band closed the set, their sweatbands were sweaty and the crowd was warmed up for something equally awesome.

…like “Awesome.” Recordings don’t do this band justice – they make them sound quiet and sedate, but when I mentioned the upcoming “Awesome” show to a co-worker who’d heard them play, she raved on for about ten minutes about how amazingly energetic the band was. As it turns out, “Awesome” is the kind of band you want at your birthday party with 75 of your closest friends to dance alongside you. At the Comet, they arrested my full attention before even playing a note. The seven-member band (ensemble? orchestra? secret agent unit?) marched onstage garbed like they’d walked off the set of “Reservoir Dogs,” then ripped into vocals that were like a jazz version of barbershop quartet harmonies. And there was an accordion! And a melodica! Be still my heart, that double whammy of delectable instruments was just the tip of the smorgasbord. From there, the band sprung into songs resembling public service announcements, call & response hymns, and even a few slinky big band tunes that sounded like they’d jumped off of…well, a Tarentino soundtrack. Hence the suits! One of the bandmembers would occasionally sit out a song so that he could flail around onstage to his own beat, much to the amusement of the crowd and his band mates; it seemed normal for this band, fling-dance fitting perfectly against the tongue-in-cheek lyrics and performance. One of my favorites in the set involved half the band saying “yes” and half the band saying “no” in an off-kilter war of words; I’m not sure who won, but the battle inspired cheesy grins in the mesmerized crowd and was therefore quite a success.

As for BOAT, I’m not sure what words to use that haven’t been poured over their heads like a seven-year-old with a bowl of ice cream and free reign on a bottle of chocolate syrup – Seattle loves this band. Imaginary Kiku wrote a gorgeous review of their show at the Vera Project earlier this month, if you haven’t read it you should finish this first (I’ll be short) and bounce over there.

BOAT is one of my favorite Seattle bands, a state of affairs that sprung from my slightly-incestuous introduction via the TIG August 2006 KEXP podcast. After a handful of attempts at seeing the band that were crushed by the “oh, they’re a Seattle band, I’ll catch them next time” mentality and a secret fear that they wouldn’t be as cool as I thought, this was my first time seeing them live. Knowing that I’d listened to a band’s albums on repeat for months and had let anticipation build up too long, the moment of truth came to this: BOAT was not mystical or magical and I did not melt into a puddle of warm fuzzy goo at their feet. They were, however, the cherry on the top of a really great line-up. Their ridiculous pop lyrics meshed well with the previous bands and, despite not taking the stage until after midnight, the quadruplet performed with energy and antics (at one point, there was an arm-punching war between the lead vocalist and the guy who kept playing guitar & keyboard at the same time while he sang). When people in the crowd heckled the band – out of love, natch – BOAT responded with puzzled grins and heckled back. By the time the show got out (no encores, it was past 1:30am), I realized that I’d been silly to postpone seeing the band live – and I’d been missing out on what’s shaping into one of our city’s unique genres: "sloppy pop." Go ahead and try it on. I think you’ll like it.

Set list:
when i grow up…
Come With Me, We'll Win
(Do the) Magic Centipede
200 Days, 59 Ways
Period, Backslash, Colon
Last Cans of Paint
Clogged Castle
Greasedip Hairclip
The Whistle Test
Elephant Ears
Four Beds for BOAT
Illustrate the History
(I'm a) Donkey for Your Love